Spent four days in the Hoh Rainforest of Olympic National Park last week under clear, sunny skies.  Maggie and I camped at the campground adjacent to the visitor center and the Hoh River.  We planned to stay one night and then head for a more remote area along the Quinault River but the Hoh was peaceful, pretty and relaxing.  We had plenty to do and saw no need to move to any other place.

The Hoh River is in a wide, rocky channel easily accessible from the campground.  The rapidly flowing main channels run gray with silt.  The quiet side channels are clear. 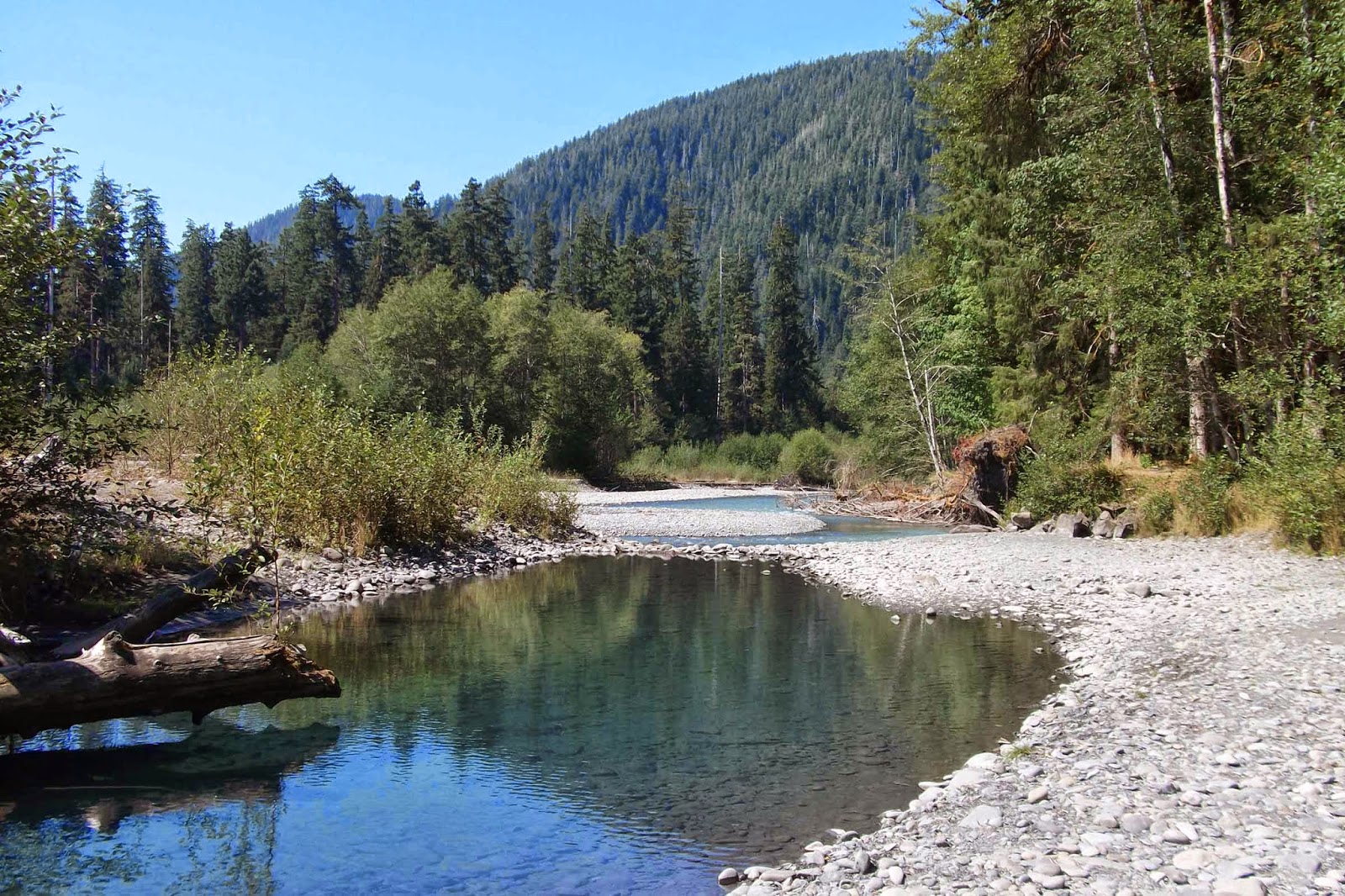 Arriving on a Wednesday afternoon, we found a good site where we could easily level the truck and set up.  The site was well separated from others and had some screening from the loop road.  It was also convenient to the restrooms but not close enough that its lights were intrusive. 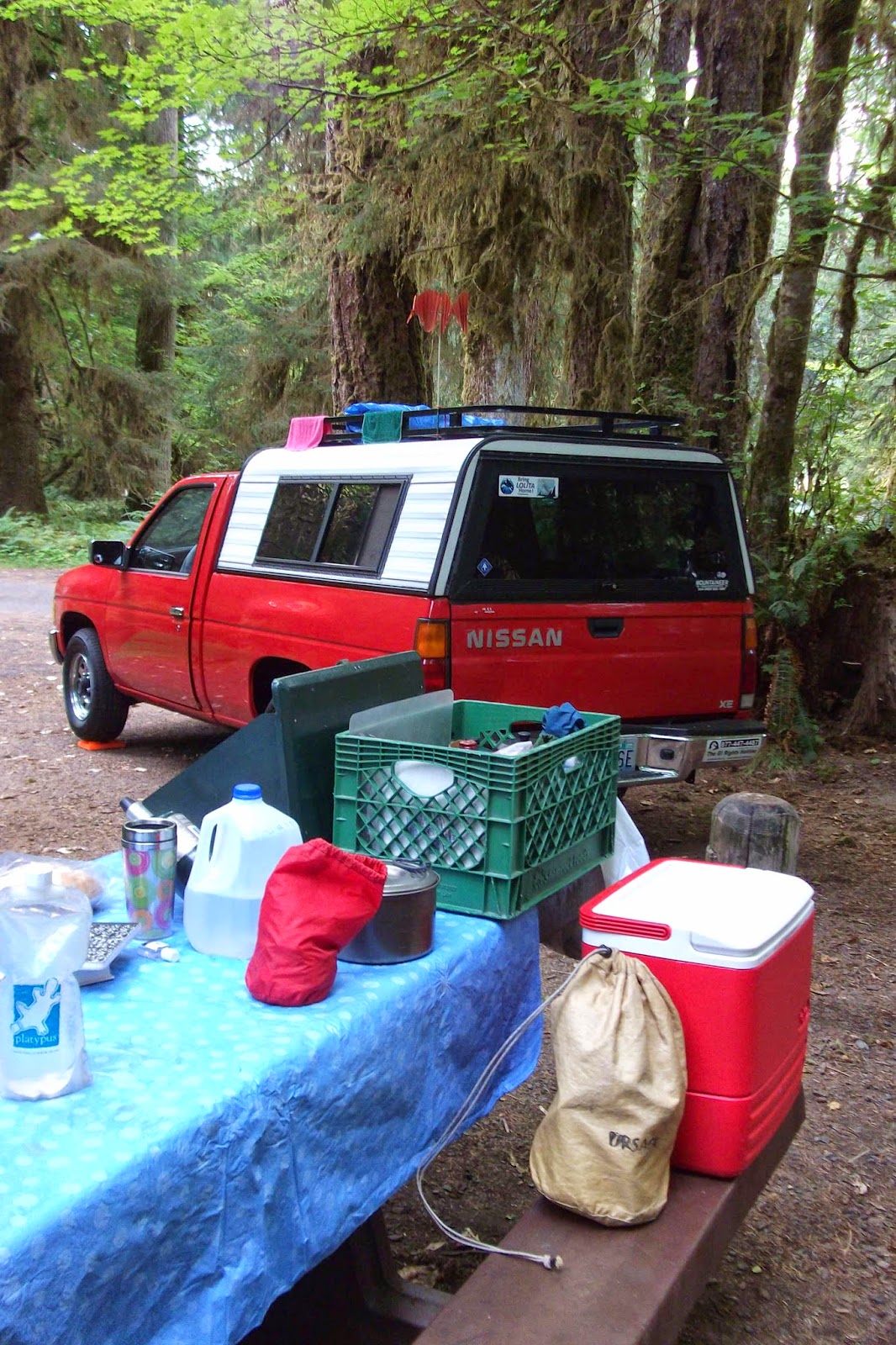 Set up included mounting the whirligig we inherited from our late friend Mel.   Steady wind throughout much of the day kept it in motion, a nice piece of whimsy that recalled fond memories of our friend. 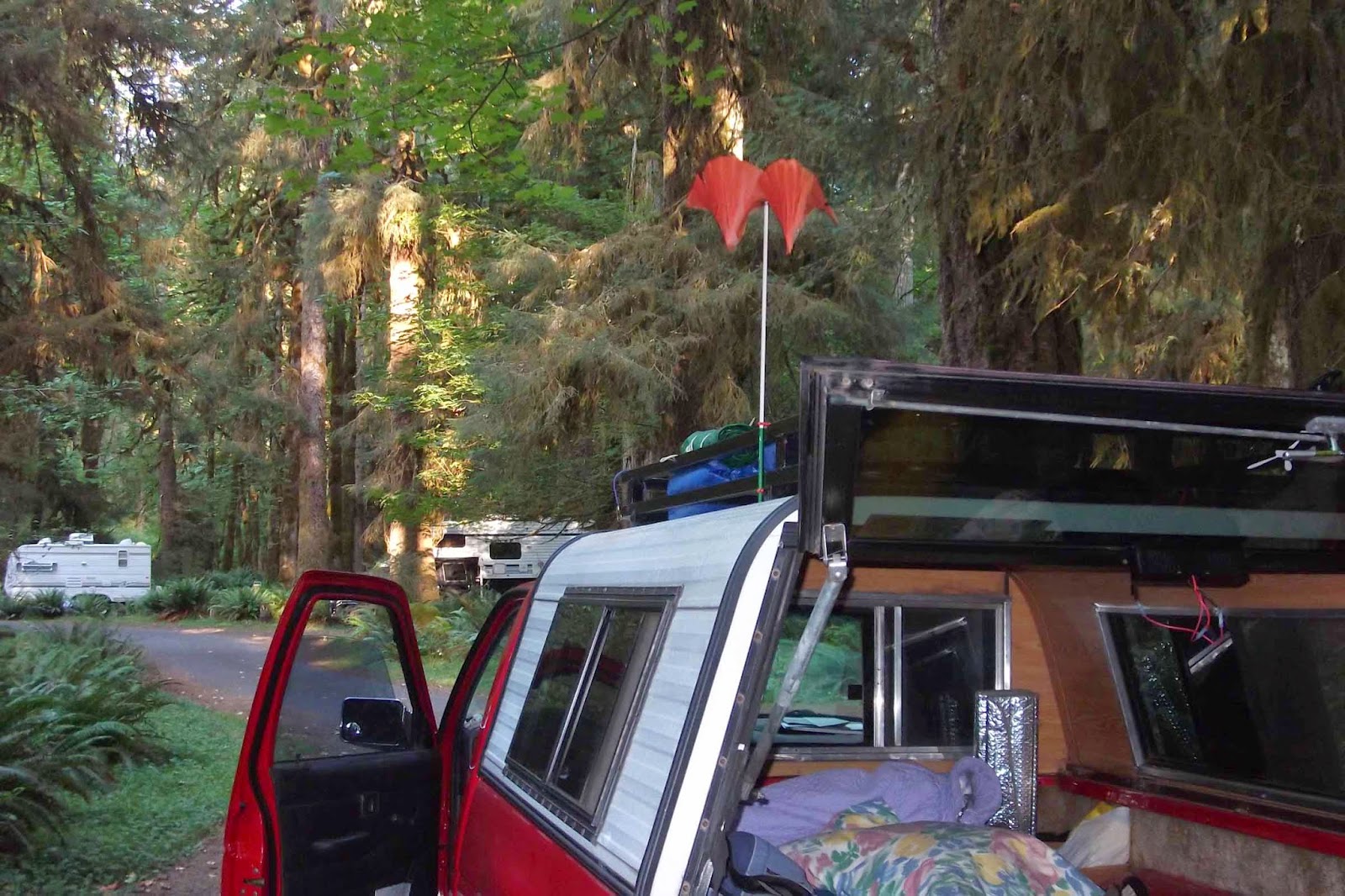 In the evening, lounging at the table after dinner, drinking hot chocolate and Irish whiskey, we could watch the light filtering through the trees. 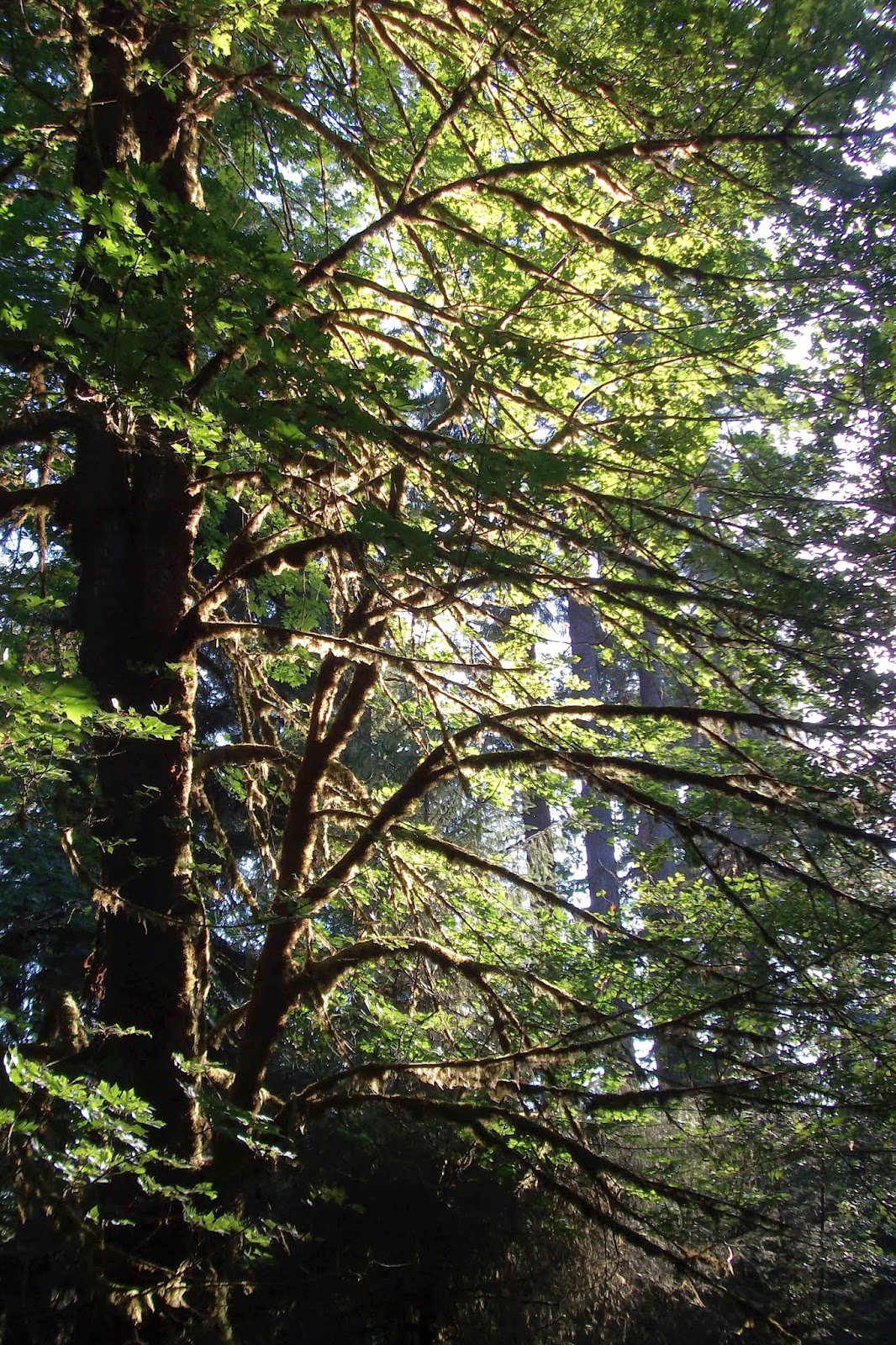 Much of our activity centered on the visitor center which was within walking distance of our campsite.  Like thousands before us, we photographed the iconic phone (not quite a) booth.  The missing phone equipment presumes that visitors have their own communication options these days, an assumption belied by both Maggie's and my lack of cell service.  Which is one reason we are here. 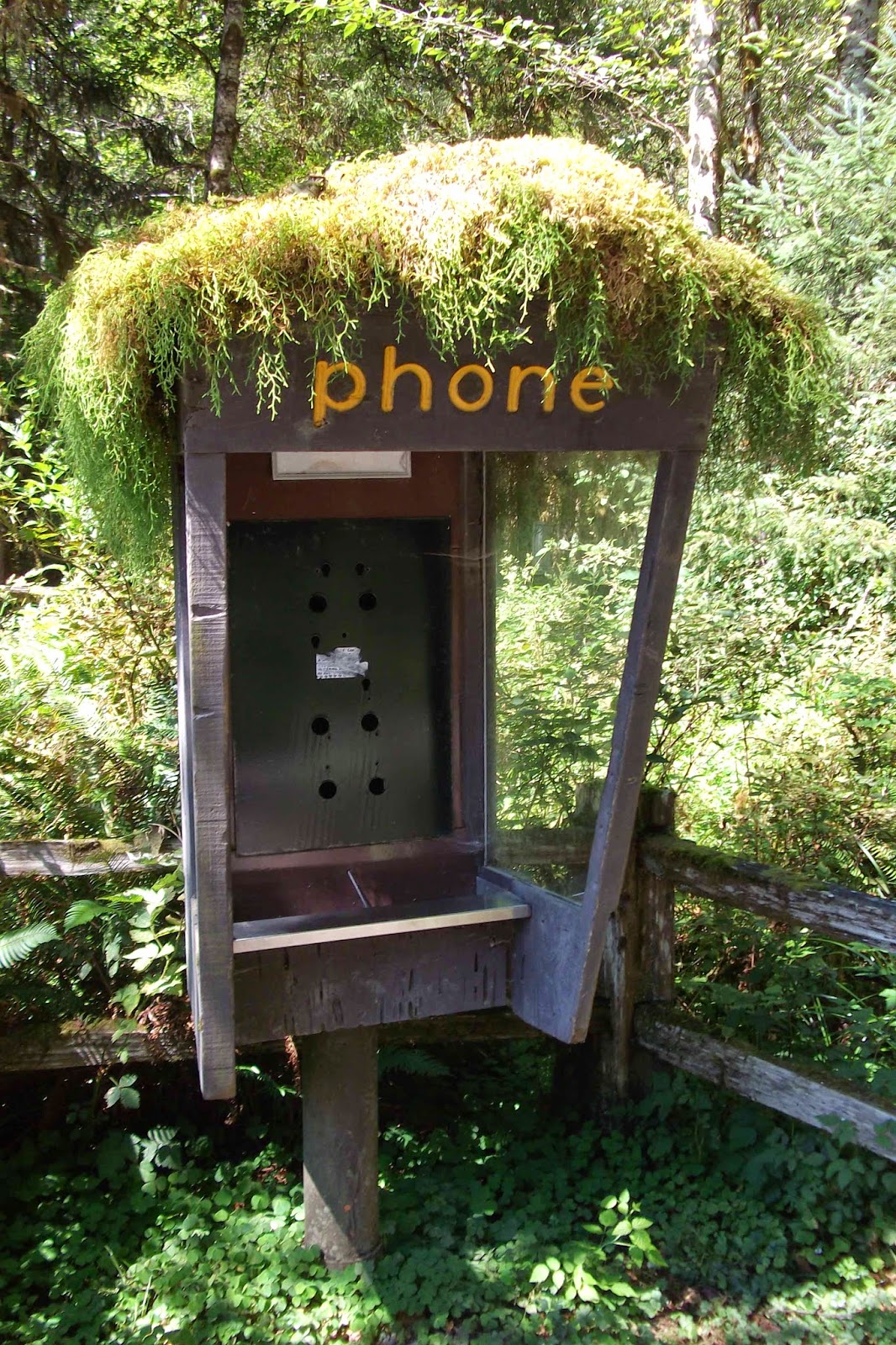 Three trailheads lead from the visitor center.  On the first afternoon (after a very leisurely, cool morning) Maggie and I joined the guided ranger tour on the Trail of the Mosses.  The tour was informative and did indeed educate me about the symbiotic nature of forest life.   It was a three-quarter mile walk with some moderate ups and downs.  We saw a lot of moss and other plant life. 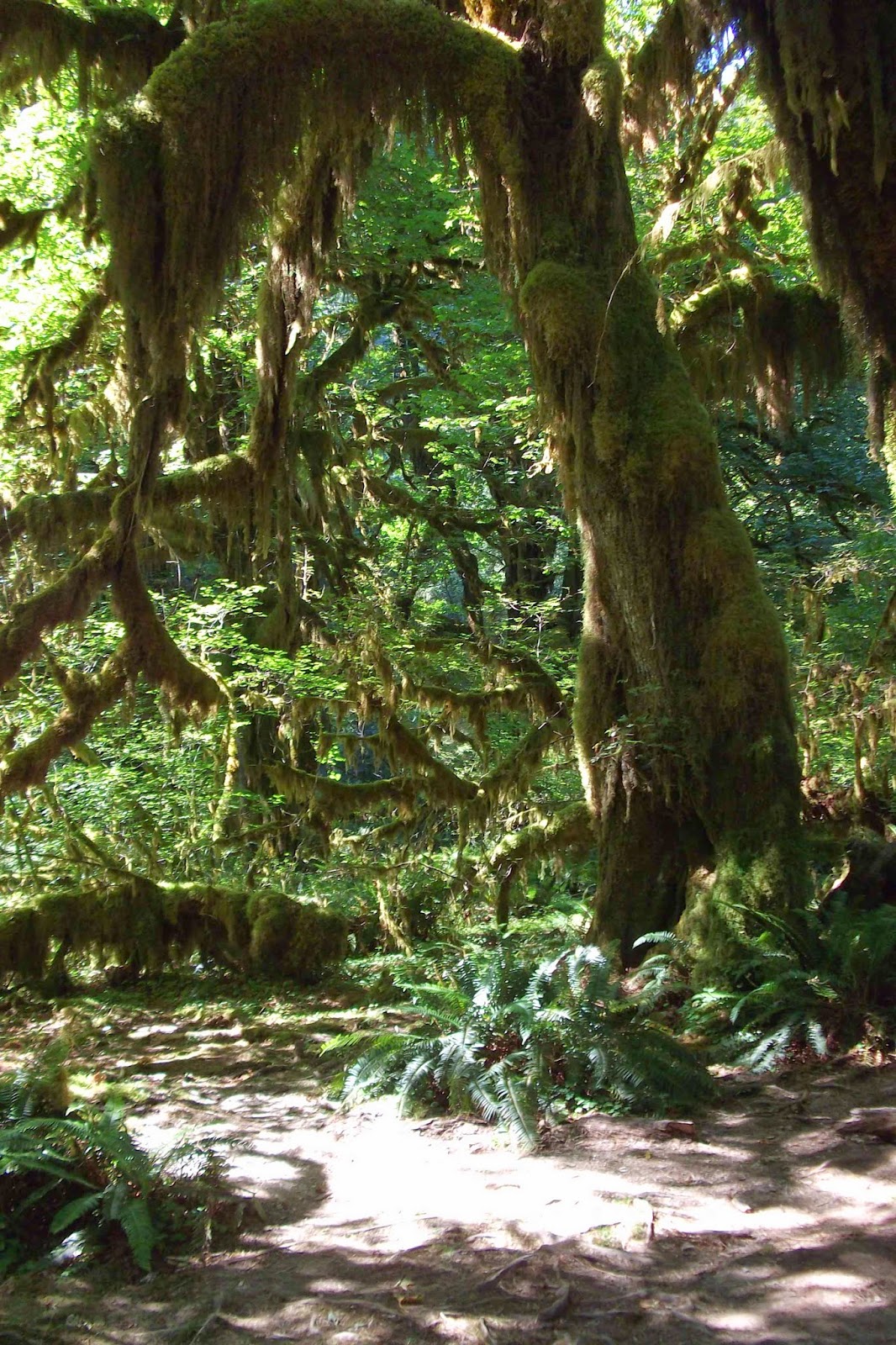 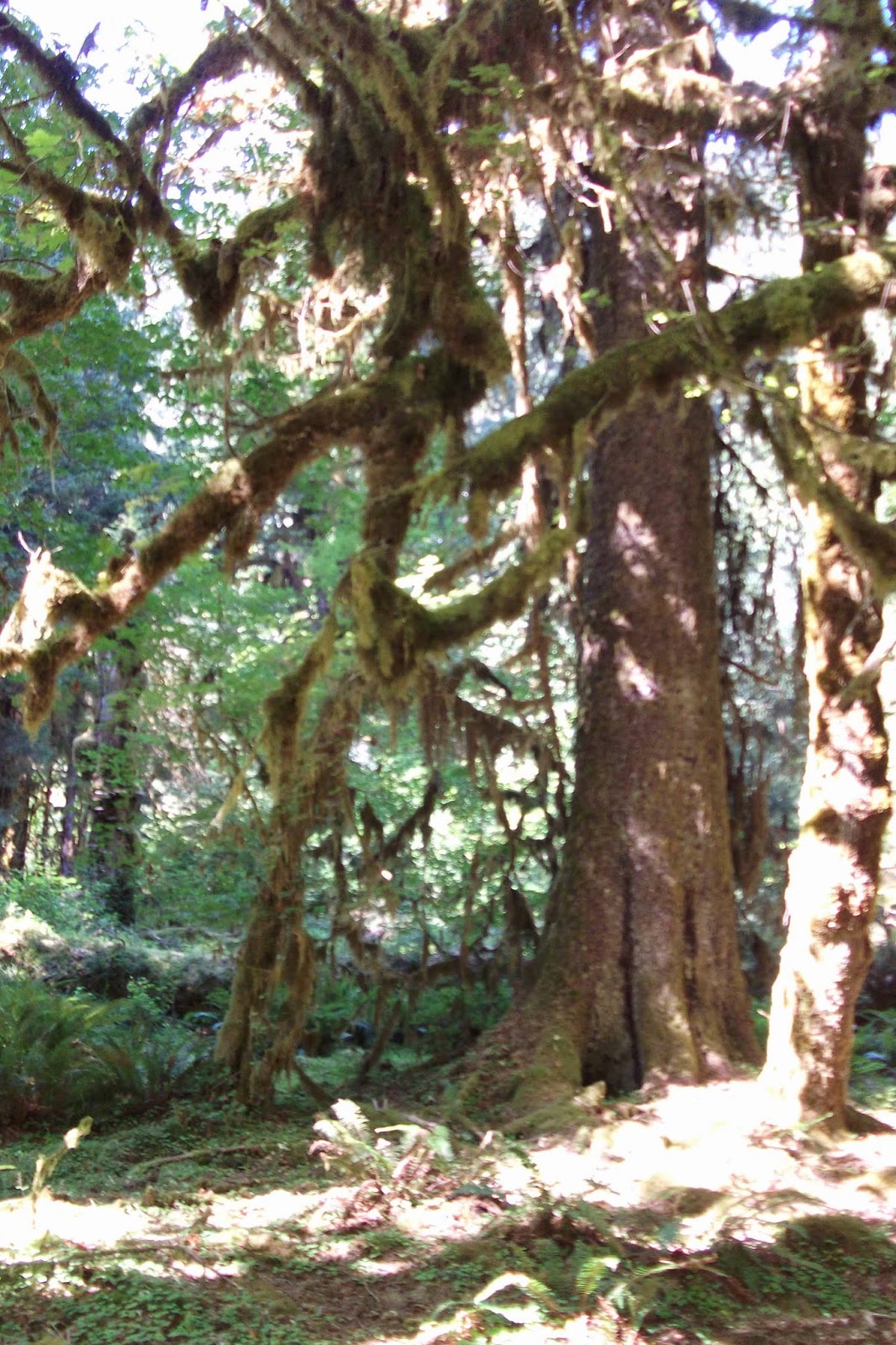 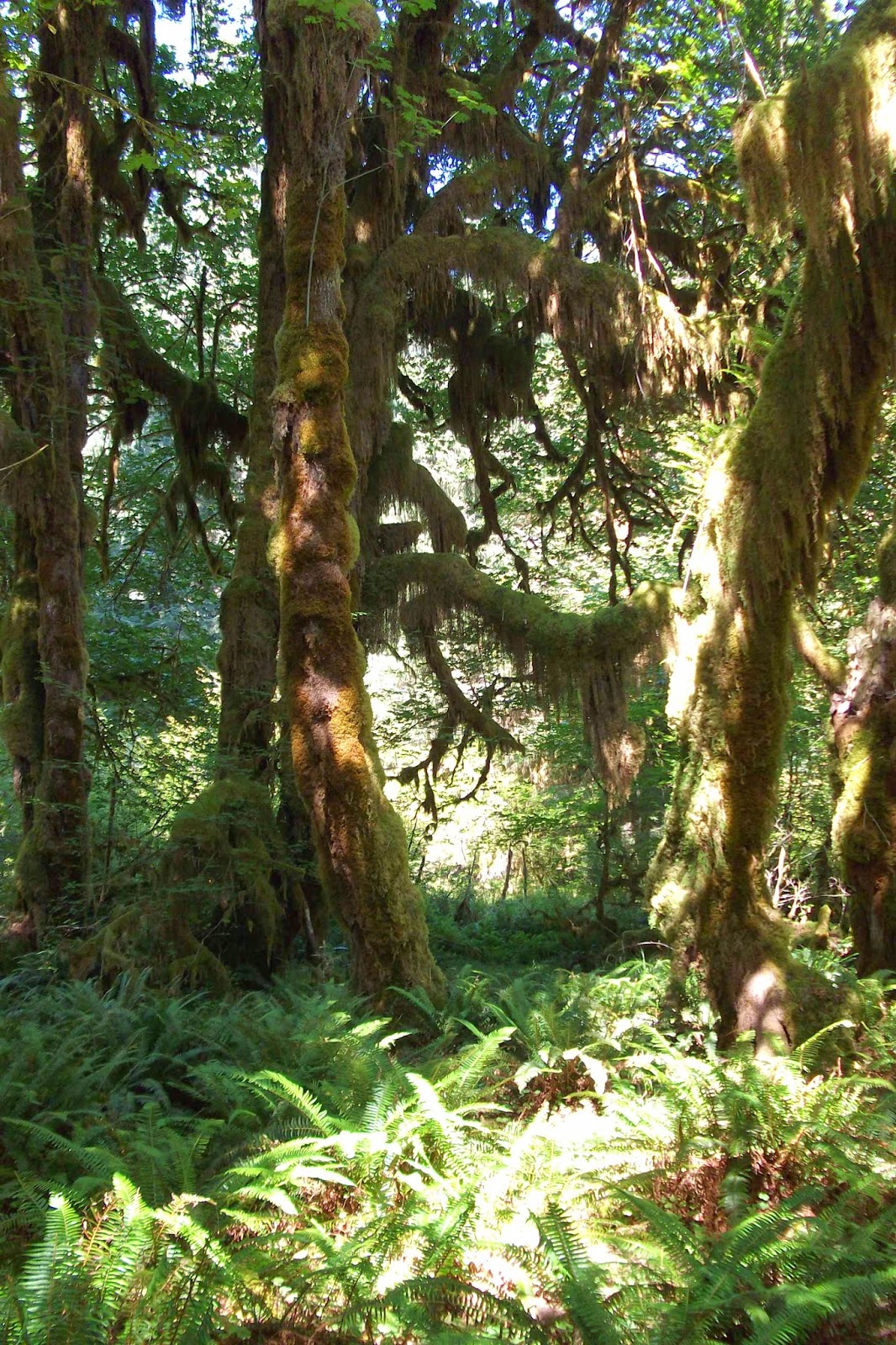 After dinner, we walked a short distance up the Hoh River trail, looking for wildlife in the early evening.  We watched a woodpecker work its way up and down a dead trunk, looking for insects.  Every now and then it must have found a good spot because it would stick its head as far into already deep holes left by other woodpeckers and really dig in.  The only wildlife slow enough to photograph was a banana slug. 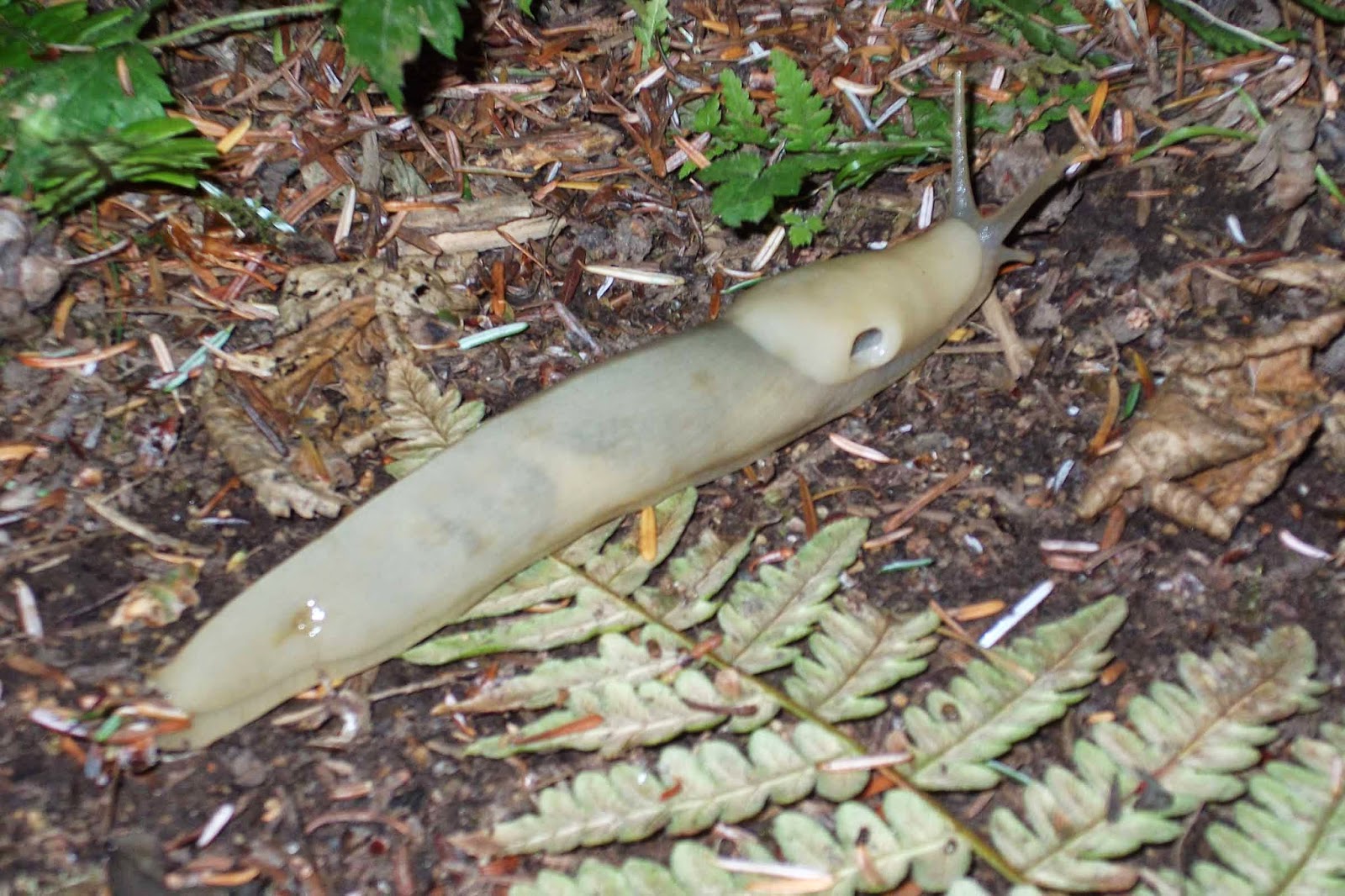 As we neared the visitor center Maggie spotted a large owl perched on a dead branch.  It was facing away from us but turned its face in our direction.  Its body was about two feet long and had black (or deep burnt umber, hard to tell in the low light) and white irregular horizontal bands from head to tail.  Neither of us have been able to identify it from our bird book.

That evening we attended a ranger talk about elk and cougars.  He said if you are in the park long enough you will see an Roosevelt elk.  As if on cue, a 13 point bull showed up in the campground early next morning.  It was browsing on the grass and blocking my way back to camp when I left the rest room.  I took the long way back to wake Maggie.  By this time the elk was browsing in the path between us and the next site. 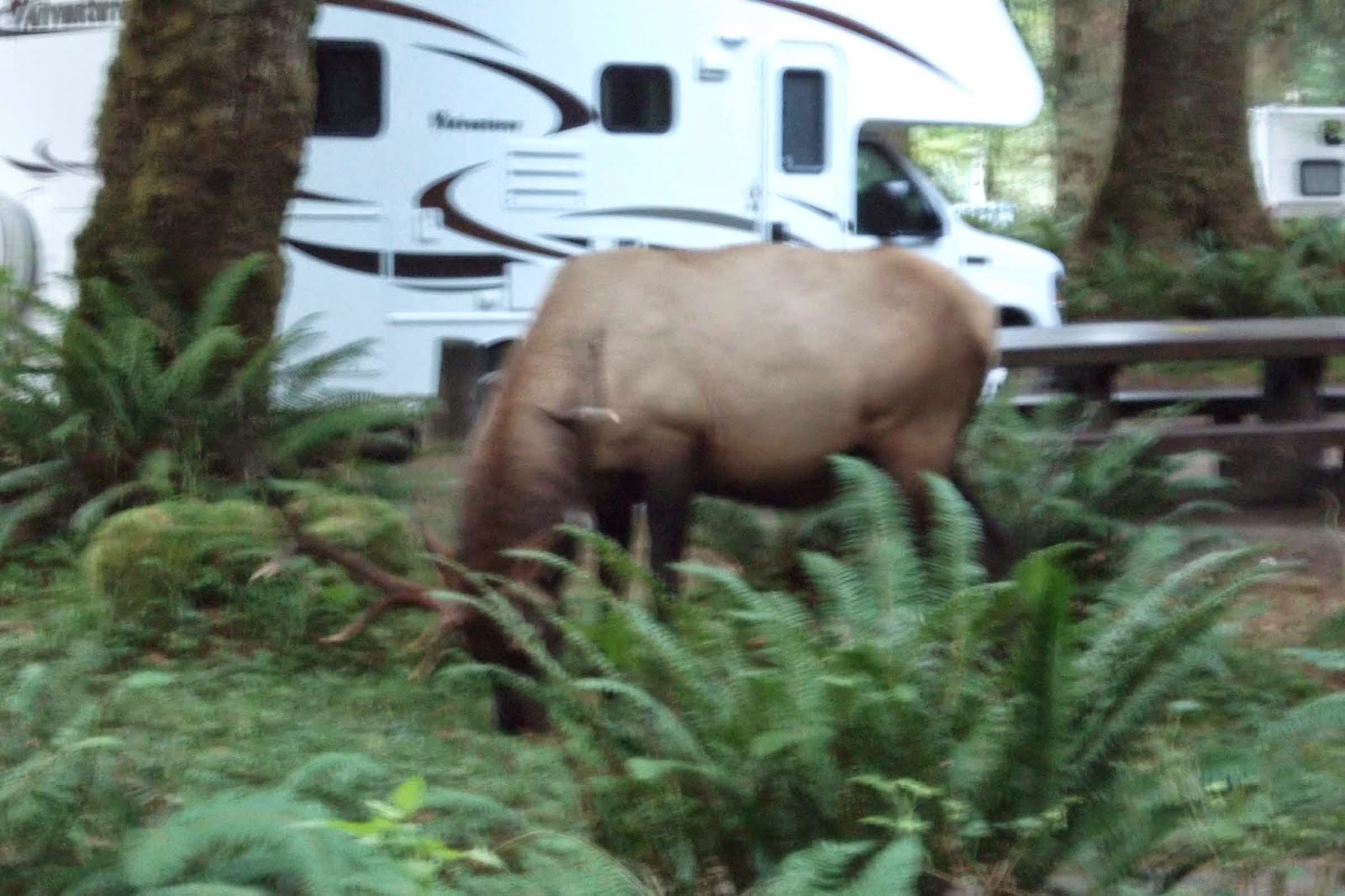 Then it browsed in the woods beyond the campsites across the loop road.  Most campers got a look at him and nobody did anything stupid. 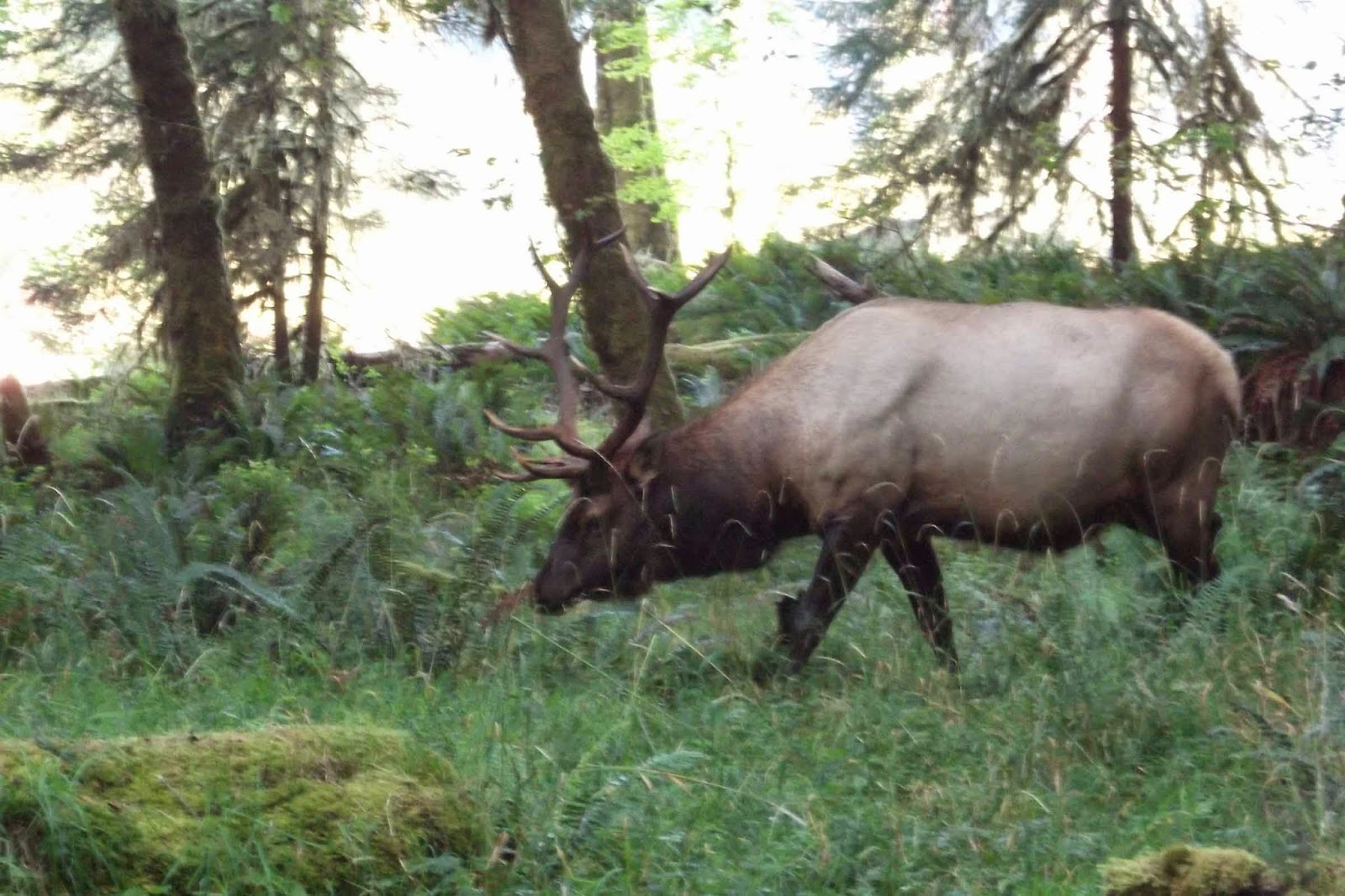 Later on Maggie and I walked about a mile up the Hoh River trail where we saw more forest and additional portions of the river. 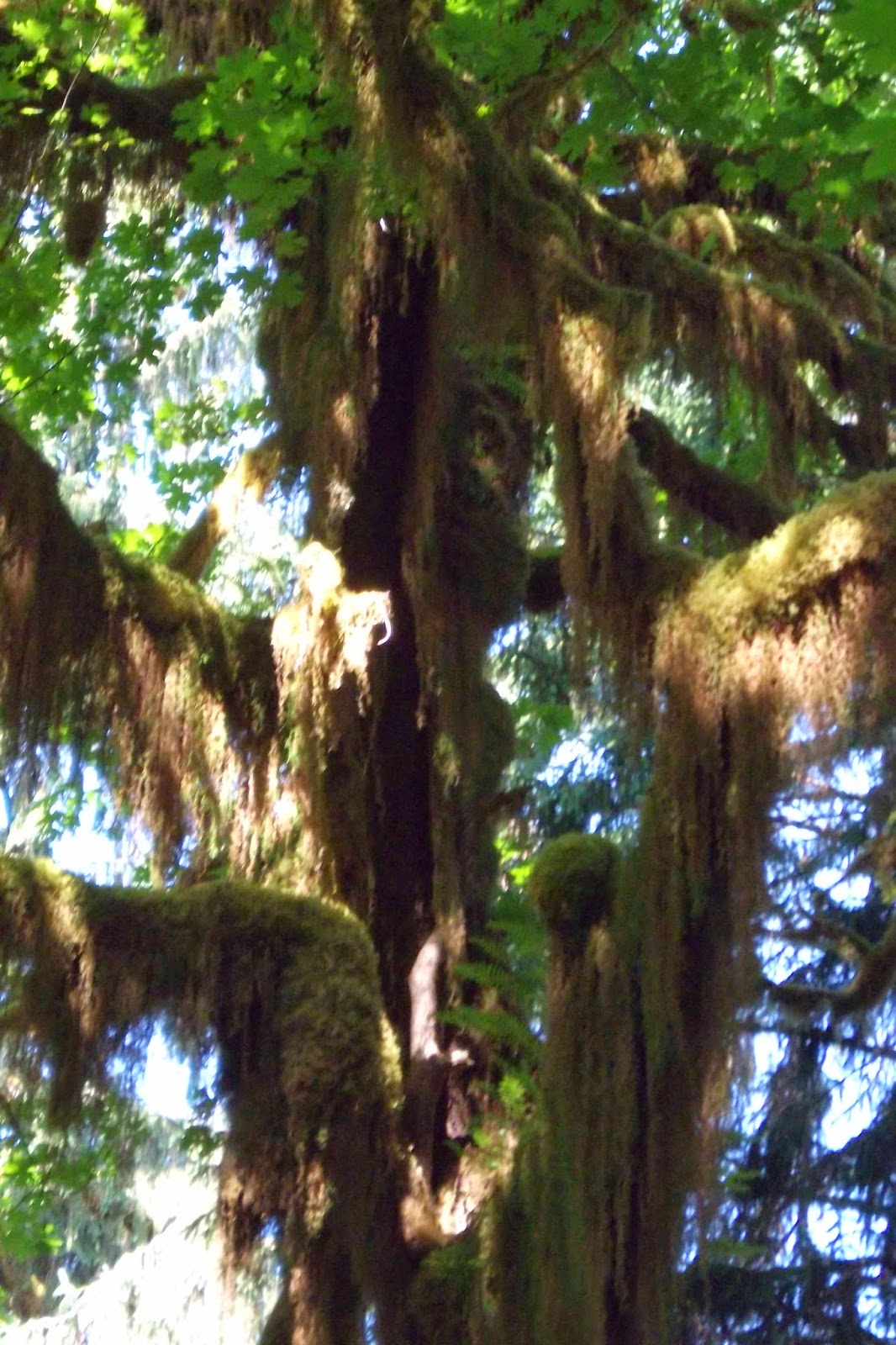 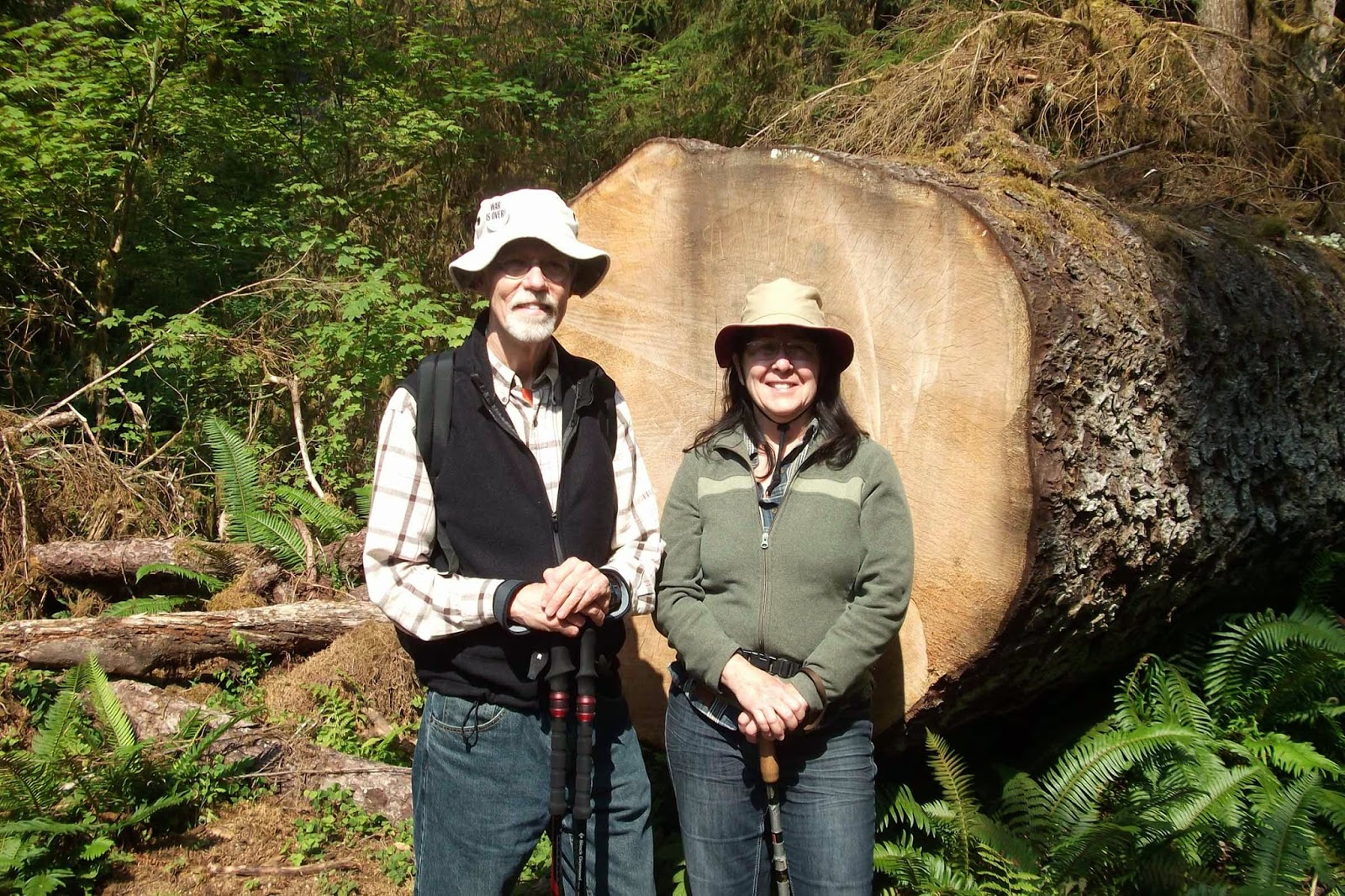 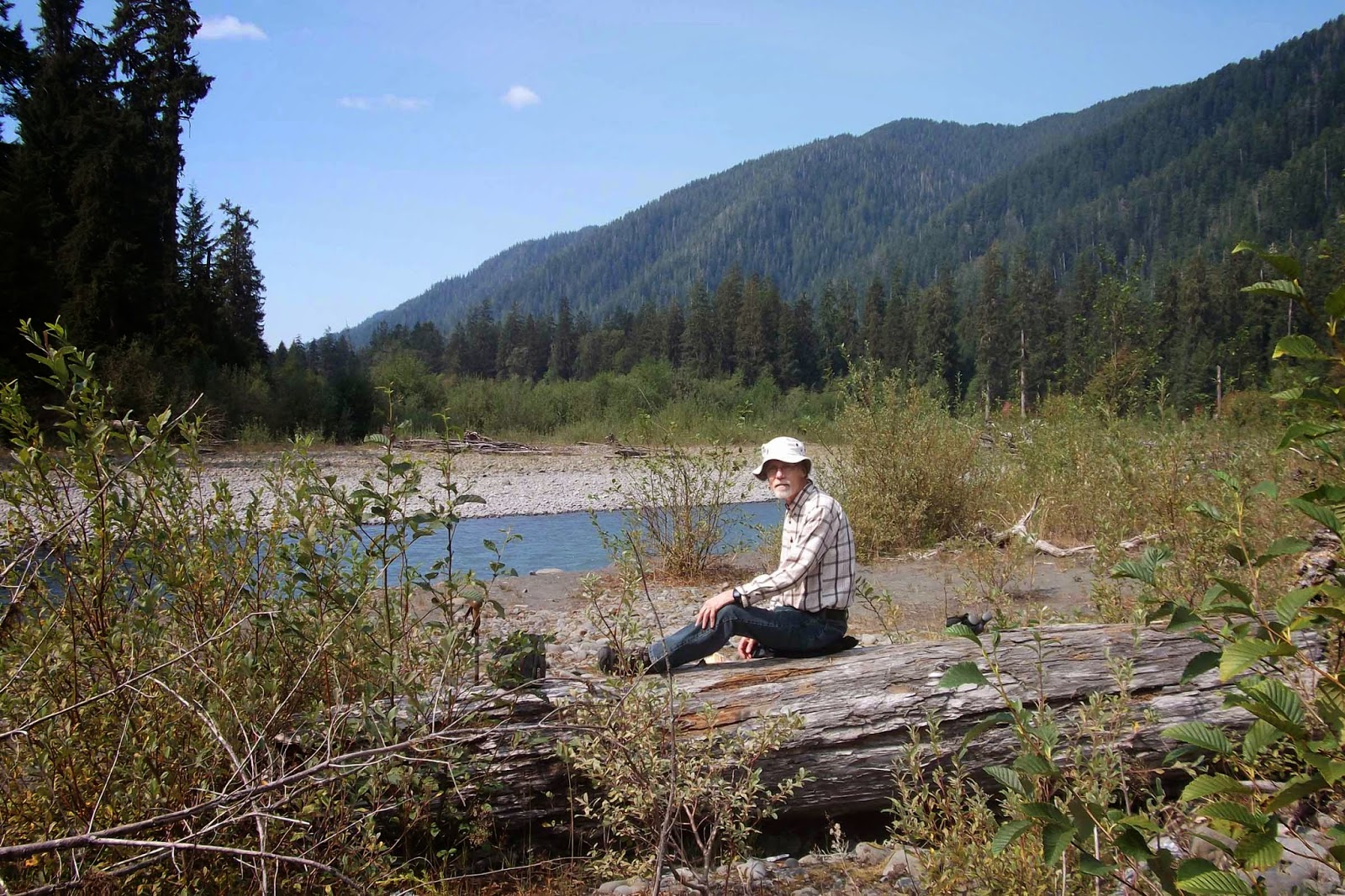 We got back to camp in time for some horizontal time before dinner. 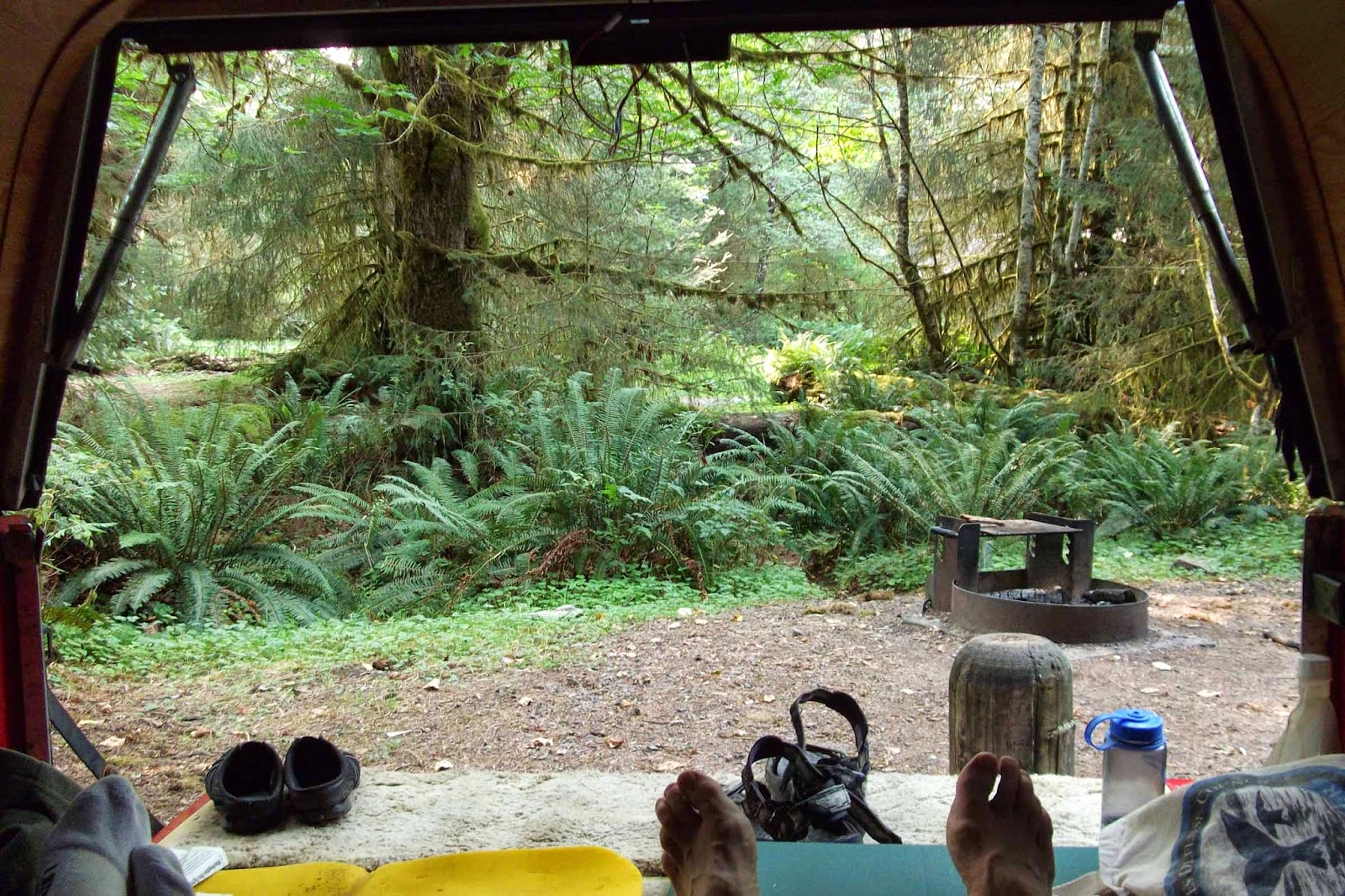 We returned to Olympia on Saturday, taking our time to explore places along the Route 101.  We stopped at Ruby Beach where it was foggy and cool.  We got a photo of the beach but not of the family-run Mexican restaurant in Aberdeen where we stopped for dinner. 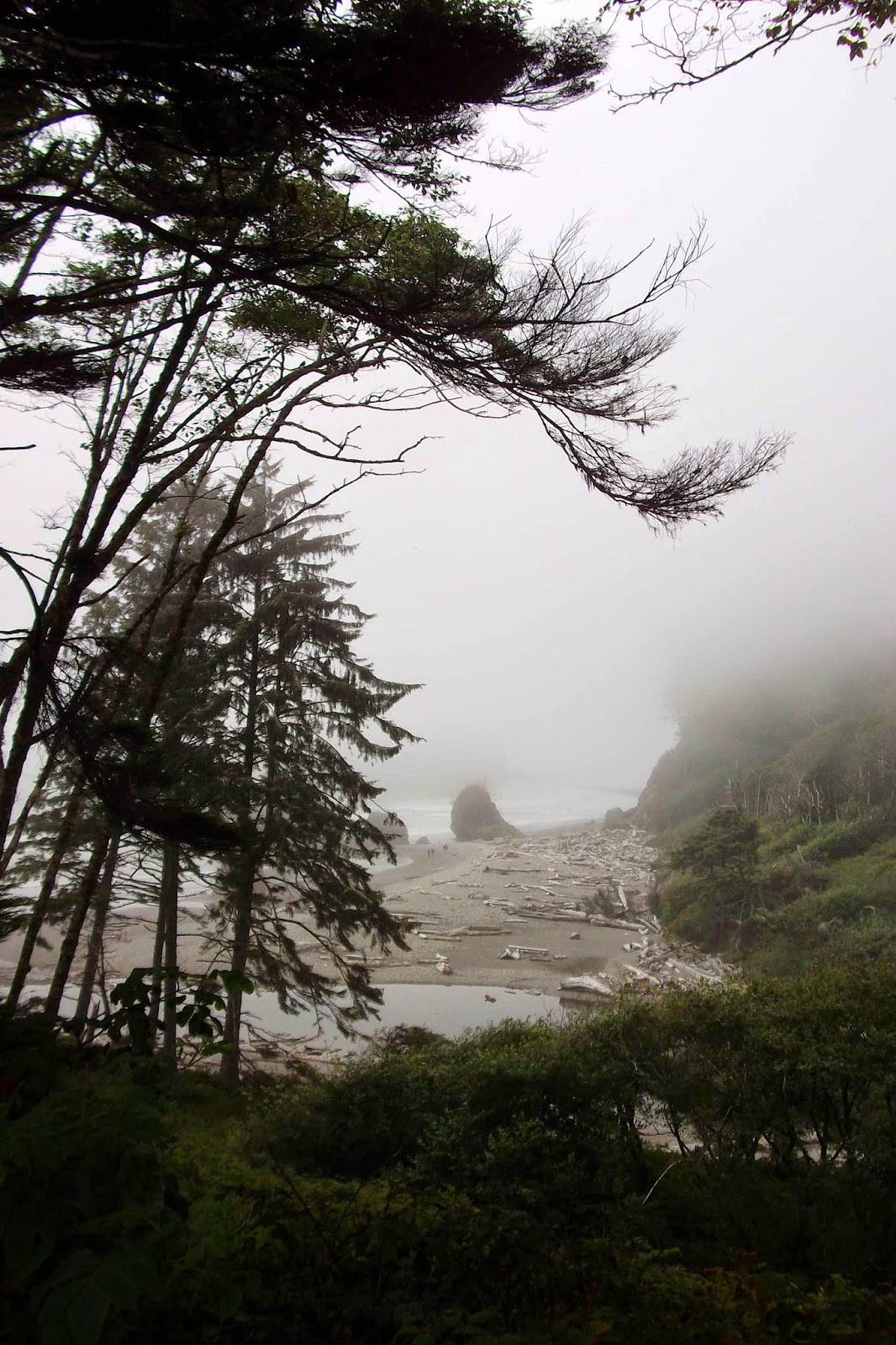 The end.
Posted by Mark Fleming at 8:03 PM No comments:

Not Too Hot August Velo News

Western Washington has had the longest run of sunny, warm and occasionally hot (over 90) weather this summer.  Today is predicted to be one of the cooler days (84) but mid-day temperatures and high UV make cycling less pleasant than I care for, especially if I have an alternative.  Which I do:  mornings.   The temperature was 50 when I got out just after sunrise today, around 7:00.  That's higher than some mid-afternoon temperatures during winter, so I can deal with it easily.  Still it was chilly enough that I was comfortable wearing a jacket over a long-sleeved shirt first couple hours of the ride.

Since much of the year here does not lend itself to early morning rides, I enjoy the chance to get out early during the summer.  It's a habit I developed out of necessity riding in Phoenix.  I soon learned to enjoy the empty streets, the low light  and the quiet.  During summer in Olympia I get a chance to indulge my fancy.

This morning offered some fine highlights.  Heading east on 33rd Avenue I could see the road undulating under a green archway, the strong morning light filtering through the foliage.  The scene recalled summer mornings hiking the Appalachian Trail and reminded me how luck I am to be out on a beautiful morning like this.  Returning over Woodard Bay I stopped to watch the tide going out.  A sea otter head popped up in the water, then several more.  I saw six total and from the slightly larger size of one and the way the others followed its lead, I'm pretty sure it was a mother and six pups out foraging.

The day was beginning to warm up by the time I reached the northern end of the Chehalis Western Trail at 9:00.  Enough to shed the jacket for the final nine miles.  The air was still cool, though, since much of the trail is still shaded.  I never broke a sweat and felt strong throughout the ride:  25 miles and home by 10.  A good way to to start the weekend.

Posted by Mark Fleming at 12:55 PM No comments: