The trip ended in November so yes, it is a November anniversary even if it began in October.    October 30, 1983 to be exact, my first hike into the Grand Canyon.   I'd moved to Arizona the year before and visited the South Rim in February.  During a May visit to Virginia after I planted the seeds for this trip and now three friends--Bev Wilson, Greg and Catharine Moser--were joining me for this hike.  By this time Catharine was pregnant so she and Greg explored Northern Arizona while Bev and I hiked the South Kaibab Trail seven miles to Bright Angel Campground deep inside the Canyon.

Starting out I'm pretty excited with lots of energy. 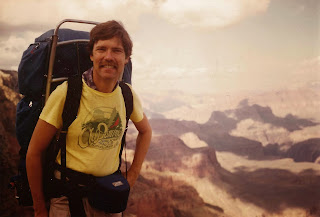 By the time we reach the Colorado river Bev still has enough energy to smile but I distinctly recall I was pretty beat by this time.  I don't think we made it to the evening beer hall at Phantom Ranch.  If we did, I know we did not stay long. 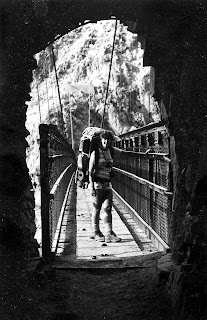 This trip was my first shooting B&W film.  I was taking my first photography class at Phoenix College that fall and was exploring camera technique as much as the Canyon.

Second day in the Canyon Bev and I followed the trail out to Zoroaster Canyon on north side of the Colorado.  We had to climb a bit out of Bright Angel but after that it was mostly contour walking.  Back in camp we did make the beer hall.  It was Hallowe'en and some were in costume.  That took energy and planning that I sure did not have.

Next morning we began the nine mile climb to the South Rim on the Bright Angel Trail.  It was a long, steady climb out that took seven or eight hours.  Greg and Catharine were waiting for us at the trailhead and took us back to their site at the campground.  Bev and I showered before we all headed back to Bright Angel Lodge for dinner.  After dinner we hung out in the lobby by the large fireplace staying warm before heading back to our sleeping bags on this chilly first night in November.

The rest of the trip took us out East Rim Drive to Desert Watchtower before leaving the park and heading across the Navajo and Hopi Reservations.  Along the route we passed Steamboat Rock, a feature I would come to know well in future years. 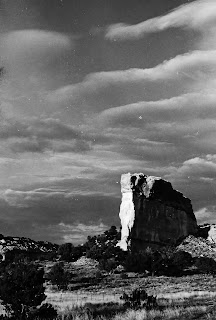 We ended up in the campground at Canyon de Chelly National Mounument camped under cottonwood trees whose brilliant yellow foliage seemed to glow on a moonless night.  In the morning we drove the rim drive and hiked down to White House Ruins.  Our final day on the road took us throug Petrified Forest National Park before heading back to Phoenix.

In one short week, I previewed much of my life in Arizona.  I was happy with that preview.  I am happy with how it all turned out.


Posted by Mark Fleming at 4:35 PM No comments:

Email ThisBlogThis!Share to TwitterShare to FacebookShare to Pinterest
Labels: Grand Canyon, Navajoland, not the Appalachian Trail

Camped at Hance Rapids after an 8 mile walk down from the rim.  The trail was fair but very steep and rugged.  My knees were screaming at me by the time I was halfway down.  I've not hiked much lately and my pack is damn heavy with five days gear.  Leroy loaned me his hiking staff which helped a lot.  I'm glad tomorrow will be a short day.  Good planning, Mark.  It's 5:20 now and evening is coming on quickly.  A few red clouds are peeking over the inner rim on the north side but the mostly clear sky contrasts with the Canyon's darker hues.  The river is generally clear and green; the rapids provide a constant sound.  After a long, hard trip down, it feels very nice to be warm, fed and relaxed.

Second night out finds me at Hance Creek after a six mile walk.  Not a bad day.  My legs are considerably better--I had little trouble on the Tonto today although the downhill sections required a bit of careful stepping.  We had nice views of Mineral Canyon as we contoured across it and the same for Hance Canyon as we came to the creek.  Both are deep sheer caynons with rocky ledges.  Hance Canyon has lots of water and lots of vegetation, including some tall cottonwoods.  The cottonwoods are the largest thing I've seen growing in the Canyon and are showing fall color.  Today has been a rest day mostly.  We spent the afternoon laying about--it's been wonderfully lazy--in preparation for three 10 to 12 mile days.

Another day's hike brings us to Grapevine Creek where water is scarce but available in potholes.  It's the last water for 16 miles so we'll have to be careful in our use while maintaining our physical requirements.  The hike over from Hance Creek was fairly easy; we covered 10 miles in about five hours.  The route offers good views of Horseshoe Mesa, Cottonwood and Grapevine Canyons.  The light in Hance Canyon this morning was soft; it streamed through gaps in the buttes.  Weather was cool and excellent for walking.  Last night also turned out to be quite nice.  The canyon is very lush and green and looked quite pretty against the deep red walls.  Wildlife was abundant today--we saw two groups of bighorn sheep:  a ram and four ewes and another ram and three ewes.  Tomorrow is the first of our two 12 mile days that will spring us from the Canyon.

On this fourth night I guess I'm glad I brought my little tent after all.  Camped at Cremation Creek, waiting out a shower that looks to be part of a large front that started moving in yesterday.  Last night was the Night of the Wind Tunnel with strong gusts blowing through Grapevine Canyon all night.  Now the wind and rain are whipping about the tent but I am reasonably snug and dry.  So far.  I just hope it lets up for dinner.  The storm is about the only adverse thing that's occurred on this trip.  My legs loosened up once I got going on the Tonto.  We've been covering about two miles an hour since.  We hiked 12 miles today, carrying all of our water for tonight and four miles of tomorrow.  We could see all the way up the Canyon to Desert View from our route today.  Every now and then we caught glimpses of the Colorado in its black gorge.  The river looks almost turquoise today.  In all this has been a great trip:  five days in the Canyon has taken my mind off everything except this wonderful place.

Now I'm heading back to Phoenix after coming out the Bright Angel Trail.  Last night was a fierce one.  The first shower let up long enough for us to eat dinner but a second storm hit just as we finished up.  I literally dove into my tent to wait out what became a heavy two hour downpour.  My tent leaked a bit at the seams (poor maintenance!!) but I stayed warm and dry despite the leaks.  Rain continued off and on throughout the night with some fierce winds but the sky cleared by morning so we were able to pack up and get out dry.  The storm left behind much colder temperatures and snow on the rim.

Hiking out of Cremation was quite spectacular, with the morning light playing off the snow on the buttes, mesas and rim. We moved out briskly in the cool morning air and were at Indian Gardens by about 10:30.  We reached the rim two hours later, after hiking up a cold, icy trail.  Showers on the rim felt great but I am sad to see such a great trip end.  Despite the difficult walk down Red Canyon on the first day and the subsequent soreness, I felt pretty good throughout the trip.  Company was good and I enjoyed once again the wonderful confines of the Grand Canyon.
Posted by Mark Fleming at 11:04 AM No comments:

Email ThisBlogThis!Share to TwitterShare to FacebookShare to Pinterest
Labels: Grand Canyon, not the Appalachian Trail

On a sunny Saturday two weeks ago I hiked the Skyline Loop Trail in Mount Rainier NP with my friend Scott.  This was our third Mount Rainier hike this year and one of the very few loop trips within my walking range these days.  We could not have asked for a better day.  We walked counterclockwise, starting from the busy visitor center with a fair amount of company.  Didn't take long to encounter snow which was common off and on for the entire route.  Snow was deep in places after some big storms but sufficiently well-trod to be well packed.   I post-holed a couple of times and had to pay a lot of attention to my footing but had no problems.  By the end of the six miles, though, I was tired and my hip was beginning to hurt.

We had exceptional views.  To the north was Rainier's mass loomed over us, up close and personal.  Immediately south was the Tatoosh Range.  Beyond were more Cascade ridges and peaks.  As we climbed higher, Mount Adams came into view, dominating the far horizon.  Barely visible farther beyond, we could see the pyramid shape of Mount Hood.  Looking southwest, we saw that we had climbed well above the saddle below Eagle Peak that was our destination in September.  Mount Saint Helens was in the far distance.

But most of all, we had sunlight, lots of it.  The world felt open and wide and we were walking on top of it. 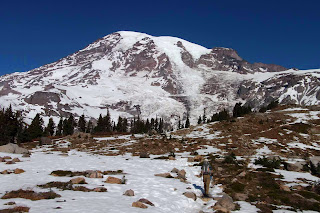 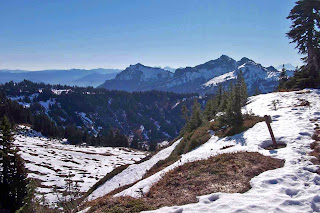 Cascades and Tatoosh in the southeast 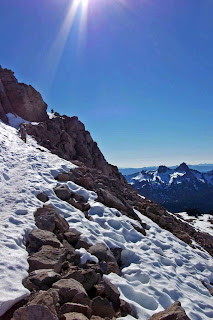 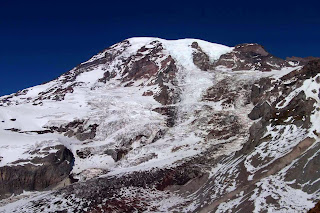 As close as we got 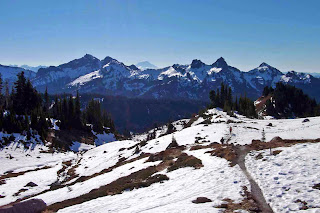 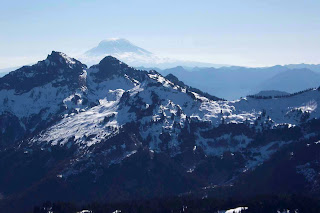 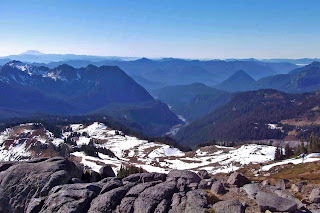 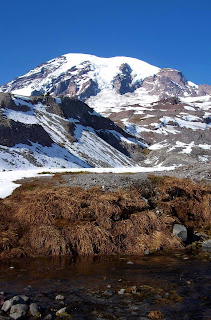 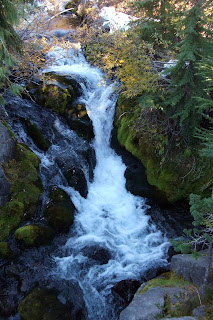 Posted by Mark Fleming at 10:02 AM No comments: