Yesterday in Olympia. Procession of the Species. 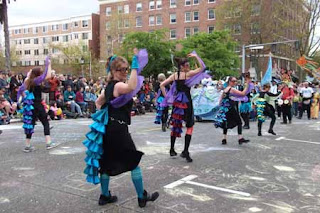 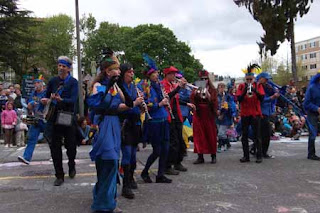 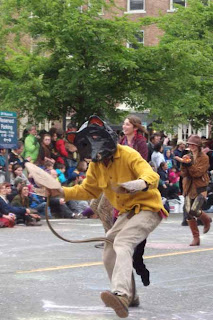 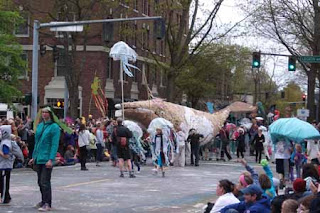 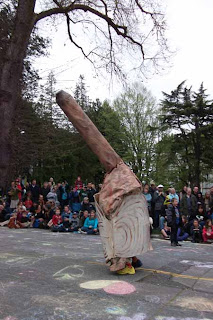 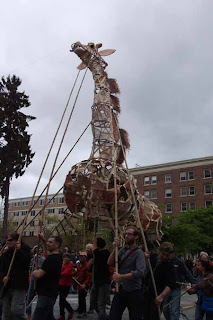 Earlier in the day we attended the Power Tool Drag Races.
Posted by Mark Fleming at 4:10 PM 1 comment:

Email ThisBlogThis!Share to TwitterShare to FacebookShare to Pinterest
Labels: not the Appalachian Trail, Olympia

Yesterday a friend and I hiked the Lena Lake trail on the Olympic Peninsula.  The trailhead is about an hour and a half from Olympia with easy access over paved road.  My hiking partner and I attempted this hike in late December but found the forest road impassible due to snow and a low clearance vehicle.  Yesterday we encountered no such obstacles.  Driving Route 101 on the way to the trailhead, we had spectacular views of snow-capped Olympic ridges as the morning clouds lifted and the sun broke through.

According to the Olympic Peninsula day hiking guide, Lena Lake is an "extremely popular back country lake surrounded by ancient timber" and generally overused.  No doubt that comes from the easy road access and the short (3.2 mile) distance to the lake on well-maintained trail.  Pretty much anyone capable of basic mobility can get there.

That's not to say the hike requires no effort.  The trail climbs 1,300 feet total, maybe half of that in the first mile.  The long switchbacks lessen the grade but it's still a climb.  Along the way, we passed through boulder fields surrounded by dense forest, skirted under a rock overhang and found water streaming in many places.  At 3 miles we found a nice spot where the trail first encounters the Lena Lake, on a bluff well above the water with a view of the lower end of the lake.  Farther along are designated campsites and a very impressive composting privy (closed for the maintenance).  A few campsites were occupied but we saw only, tents, tarps and hanging food bags.  No people.  We crossed the bridge over Lena Creek and found a lunch spot nearby.

For people, we encountered a fairly large troop of Boy Scouts (at least 20 plus adults) who camped on the other side of the lake, and day hikers.  Not counting the scouts, we saw most of the people as we walked out.  The day was mostly cloudy, sometimes sunny.  It clearly favored the 70 percent chance of no showers implied by the predicted 30 percent chance of showers forecast for the day.  I expected at least some damp and drizzle.  Its absence made for a leisurely, pleasant walk.  Starting out I wore a rain jacket over a polypro long-sleeve turtleneck hiking shirt but removed the jacket soon enough.  The shirt was plenty comfortable as long as I was moving.

Actual hiking time was about four and half hours, including lunch at Lena Lake, dawdling at the 3 mile viewpoint and taking photos.  We made it to the 3 mile point in about an hour and a half, which includes Scott returning to the car shortly after we started walking to make sure the headlights were off (they were).   My arthritis did not give me any problems walking; it was most noticeable when I had to scramble around the few obstacles in trail.

The trip ended at the Fish Tale Brew Pub in Olympia.  In all, a very nice day.

Here are a few images. 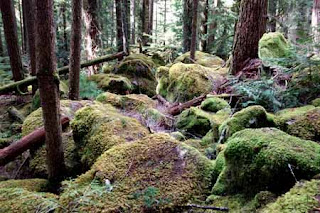 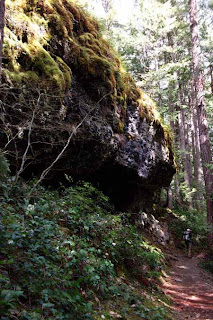 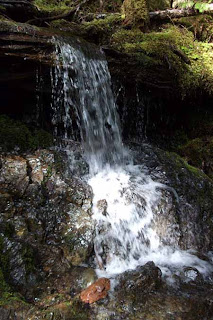 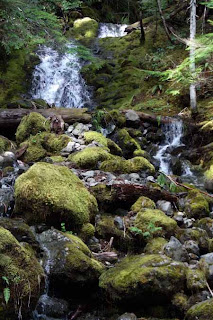 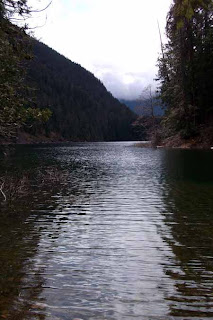 Lena Lake
Posted by Mark Fleming at 9:29 AM No comments:

Email ThisBlogThis!Share to TwitterShare to FacebookShare to Pinterest
Labels: not the Appalachian Trail, Olympic Mts


18 Apr 1992.  Bill Williams Wilderness, Arizona.  I'm sitting in the shade of a rock wall beside the Bill Williams River.  The day is hot but the shade is cool and a nice breeze is blowing.  We walked in about two miles.  It was pretty easy but did require a lot of in-and-out-of-water, bushwacking and scrambling in places.  The high point was seeing a family of bald eagles--two adults and two fledglings--nesting on a cliff above the river.  Two eaglewatch volunteers let us look through their spotting scope for a great view of the family.  We could see one of the fledglings perched on the edge of the nest trying out its wings.  An adult was eating a fish while the other circled overhead.  We also got good views of the nest as we walked downriver until rounding a bend.

Now we are camped on a sandy bench above the river.  The plan was to base camp and explore downriver.  The reality has been lying about, swimming and fishing.  I did wander up a side canyon looking for photos but have otherwise been pretty inactive.  I watched about 10 buzzards circling above the canyon.  We passed a dead javelina upstream so they may be attracted by that.  The buzzards are impressive birds--cruising almost effortlessly, wings folded back as they dive, wings extended as they cruise.  We also saw a large swarm of swallows, darting around a ledge over the water.  In all, a nice day.  The canyon is not as sheer as I expected.  Except for a few narrows it's pretty open.  Even the narrows are not that closed in.  The riverbed is loose rock with a sandy bottom.
Posted by Mark Fleming at 12:01 AM No comments:

Email ThisBlogThis!Share to TwitterShare to FacebookShare to Pinterest
Labels: Arizona, not the Appalachian Trail

Like a riddle, wrapped in a mystery, inside an enigma, Kevin Powers’ tale of two soldiers, Privates Bartle and Murphy, in Iraq reveals itself slowly.  Narrated by Bartle, the story puts the reader on edge from the start, offering hints and adding facts in a series of what seem at first to be disconnected scenes occurring in mostly in Tal Afar, Iraq and Bartle’s hometown, Richmond, Virginia.  The reader early on learns that Murphy is dead and that his death is not the end of the matter.  The story unfolds, filling the missing pieces on either end:  the events in Tal Afar and their impact on Bartle in Richmond, to which he has returned only in body.  His conscience is still in Iraq, wrestling with his part in Murphy’s death.  His turmoil is more than guilt over a broken promise-that-he-never-should-have-made to Murphy’s mother to keep her son safe.  What begins as a combat tale evolves into a tale of devolution into the fatal logic of war and its consequences.  Powers, an Iraq War veteran, writes credibly of combat:  how it feels, how one thinks, how one moves and reacts, how everything happens at once.  He evokes both the action of combat, the landscape in which it occurs and the long tail of responsibility and retribution that follows.
Posted by Mark Fleming at 8:40 AM No comments: