When I was in Virginia in late October I made a point of visiting Reids Gap on the Blue Ridge Parkway and took this selfie.  My phone is pretty limited--it lacks a reverse camera that lets me see what I'm photographing so I never know what the results will be.  As it turned out, I rather like the result so it's a keeper. 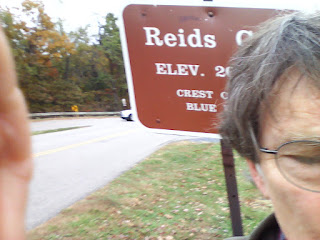 Reids Gap is a significant location in the geography of my life.  I discovered it in 1972 after returning from my year in Vietnam.  I I had already begun to spend time hiking as a way of decompressing from that experience and was preparing to begin graduate school at the University of Virginia.  I met a woman whose father had a cabin about a mile below the gap.  Few if any other family members were using the cabin in those days so we took whatever opportunity we could to spend time there while we were dating and after we married.  Since the Blue Ridge Parkway and the Appalachian Trail passed through Reids Gap, it became a focal point for many of the trips there.

Even after we moved to Richmond, the cabin and the gap were still only a couple of hours away.  I recall watching many sunsets and a few sunrises from that spot.  It was also my first real introduction to the Appalachian Trail.  I saw the white blazes and wondered what hiking the entire trail would be like.  At the time that seemed like a preposterously unlikely prospect.

The marriage didn't last--no more trips to the cabin-- but my fondness for Reids Gap never diminished.  I continued to visit and hike in the area for the next few years before moving to Arizona.  I typically made a point of visiting the gap during periodic visits to Virginia.  When my dog, Toby, who shared my years in and around Reids Gap, died in 1988 my partner Maggie buried a small portion of his ashes along the AT south of the gap when she drove to a national abortion rights march in Washington DC.  Thirty years later we buried some of Prince the Dalmatian's ashes in the same area.  Prince never visited Reids Gap but he was, like Toby, a special dog so it seemed right to leave a bit of him in that special place.

Reids Gap in 2019 looks much the same as it did when I first saw it in 47 years ago.  Meadow Mountain and other large landforms still dominate the view to the south.  Devils Knob rises to the north.  Open meadows flank County Road 664 as it crosses from Nelson County to Augusta County over the crest of the Blue Ridge.  If I look no farther I could think nothing has changed, which is hardly the case.  When I first drove to the cabin from Waynesboro the pavement on Route 664 ended well before reaching the cabin.  I remember the route down the east side of the ridge being even more primitive.  Now all of the roads are paved.  On the east side 664 is the gateway to a major ski resort.  The western side has many more houses than I remember from the past.

Perhaps the biggest change is that Reids Gap is no longer Reeds Gap, the name by which I had always known it.  It was Reeds Gap when I first encountered it and was still Reeds Gap when I hiked the AT in 2002 and 2005.  I discovered the change during a 2016 visit when I saw the new sign.  The Nelson County Historical Society informed me when I inquired that the gap was named for a early settlers in the Rockfish Valley named Reid and a descendant of the family moved to the Rockfish Valley and put a great deal of effort in documenting the correct spelling and effecting the change.  I never followed up on how the incorrect spelling came about but the lack of standard spelling prior to the mid-19th century probably had something to do with it.

The name change is a bit jarring because it's not what I am used to seeing.  Still, the landscape is timeless and my memories and permanent.  In the end, changing one letter is of little real consequence.
Posted by Mark Fleming at 10:42 AM No comments: