Last day of August.  In a month this hike will be over.  But for the moment I still have 328 miles to go.  Today's miles were fun, tedious and exhausting.  Left camp in the fog which thickened as we climbed to the alpine zone.  The fog cut out any views but created a reas intimacy on the trail.  Grasses, wet with dew, shimmered in the low light.  The trail was reduced to the small area visible in the fog.  Red and Gary were ethereal figures at times ahead or behind me.  The sun began peeking out around 10:00 and by the time we reached Lake of the Clouds Hut 30 minutes later, blue sky was visible and sunlight shone through.  Hiked up to Mount Washington summit with many others, veritable ziggurat .  Washington's slopes are very rocky--a jumble of talus.  The summit is a real circus, with visitors coming by foot, auto and cog railway.  Felt kind of odd to be in such a crowd but that didn't stop us from chowing down a the visitor center snack bar.  The climb down from Washington and across Mounts Clay and Jefferson was more talus and rock. Hard going.  Got into The Perch Shelter, a mile down from the ridge on rocky trail, only to find it full on this Saturday of Labor Day weekend.  People made room for me in the shelter.  Red, Gary, Kutsa and Montreal are stealth camping nearby.  Somehow it all works out.
Posted by Mark Fleming at 2:00 AM No comments: 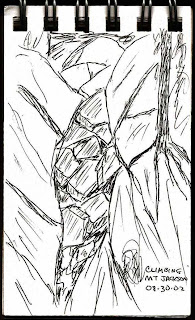 Posted by Mark Fleming at 5:37 PM No comments: 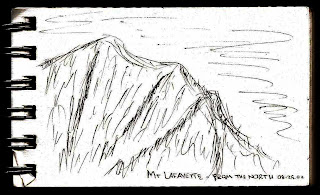 Posted by Mark Fleming at 1:37 AM No comments: 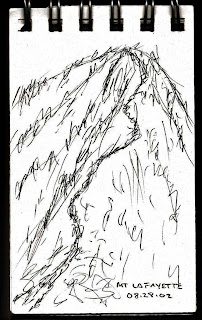 Posted by Mark Fleming at 12:30 AM No comments:

First night in the White Mountains.  Camped at Gordon Pond.  Originally planned to camp at Beaver Brook Shelter but we were there for lunch and did not want to sit around all afternoon so we pushed on and ended up with a 14.8 mile day.  We climbed Mount Moosilauke this morning out of Glencliff, a long steady climb that took us into a thick fog.  Made the summit in 2.5 hours.  Windy, foggy and cold.  We headed down quickly.  Descent was through a jumble of rocks down a steep slope.  Very hard.  Several places had 8x8" timbers sunk ito the rock.  A few places had rebar hand holds.  Got to Kinsman Notch around 2:30 and found trial angels handing out cokes and donuts.  Climbed on to Kinsman Ridge for the last 3.4 miles.  Steep climb with lots of up and down up top.  Pleased to make good mileage in these rugged mountains.
Posted by Mark Fleming at 12:57 PM No comments: 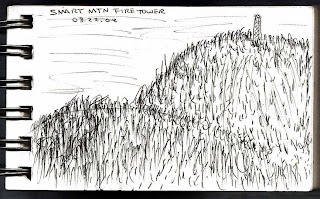 Posted by Mark Fleming at 4:04 PM No comments:

Hiked 12.5 miles to Smart Mountain where we are camped in the fire warden's cabin to escape the rain.  Early morning was sunny but the day steadily clouded over.  Rain stared around 3:30 as we were climbing.  Wasn't too heavy then but it's been steady and heavy since about 6:00.  Glad to be here.  Happy to see the rain although it causes discomfort.  New Hampshire is very dry.  Crossed many dry watercourses today.  Found water in two streams but a couple of southbounders told us that the only water before Smart Mountain was at a house, so we were already full when we crossed the streams.  A homeowner adjacent to the trail lets hikers use his hose.  In fact, a maintained side trail leads to the house.  We ate lunch there.  Met the lady of the house who gave us popsicles.  Lots of ups and downs today--hard going.  Fortunately, the cloud cover kept the temperatures down.  Didn't really sweat till the final climb--a 2,360 foot ascent in under four miles.  Earlier we climbed 1,180 feet to Holt's Ledge.  Had good trail all day.
Posted by Mark Fleming at 12:30 AM No comments:

In and out of Hanover, NH in less than 24 hours.  Got in yesterday around 2:00 PM after walking 10 miles from White River, VT--last 1.5 was all roadwalking through Norwich, VT and across the Connecticut River into New Hampshire.  Found a "crash pad" for hikers at Panarchy House near Dartmouth College.  The space was essentially the basement of a coed fraternity of some sort.  It was grungy and reeked of sweaty packs but it had a shower.  I tried to go to the Eastern Mountain Sports store in W. Lebanon but discovered that I couldn't pull it off with public transportation and gave up.  Bought groceries and had Thai food with Kutsa, Montreal, Pop Tart and Pinata.  This morning we ate at Lou's Diner and I hit the library for about an hour and a half.  Did email and talked to Maggie, my brother Neil and friend Bev Carver.  Finall got out of town aroud 12:30.  Day was cool in the shaded of the woods, trail was good and I made good tilme to Moose Hill Shelter.  Had to climb 2,222 feet and another ridge earlier but walking was decent.  I motored along at a brisk 2 mph with only three short breaks.  It was pleasant.

We seem to be ending this hike in much the same company as we started with.  Radar is now behind us, having gone to SC with Southpaw for his grandmother's funeral.  The Hammock Brothers are just ahead of us; they passed through Hanover yesterday.  Slog and Swamp Donkey caught up with us in town and are camping somewhere on the ridge above.  Any opportunity to catch up with old friends is okay with me.
Posted by Mark Fleming at 8:06 PM No comments: 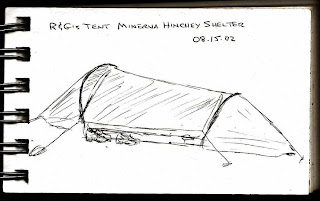 Posted by Mark Fleming at 3:33 AM No comments: 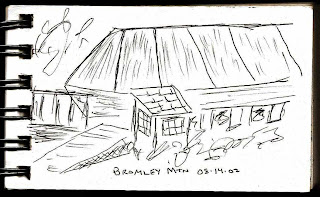 Posted by Mark Fleming at 2:32 AM No comments:

The Appalachian Trail turns 75 years old tomorrow.  The final section of trail was completed on 14 August 1937.  I discovered it when it was a still youthful 35.
Posted by Mark Fleming at 5:15 PM No comments:

A zero day [in Manchester Center, Vermont].  Rest and relaxation.  Except that my winter bag went lost in the mail and Gary broke a tooth.  So we get a second zero day tomorrow.  Gary can see a dentist and I can order a new winter bag.  Finding one as light as my Hummingbird will not be easy but I'm sure I'll come up with something.  It's a drag but just one more problem to be solved.
Posted by Mark Fleming at 12:43 AM No comments:

Camped at Stratton Pond, only 11 miles from a zero day in Manchester Center, Vermont.  Am I ever looking forward toa day off.  Wish I was camped closer to the road so I could get into town earlier but just getting here was enough for today--15.2 miles plus a half mile to this campsite.  Walking was good--I felt strong, didn't hurt much and he trail was good, a bit rocky and steep coming out of camp but most of the morning was level and even.  Started climbing Stratton Mountain around 11:30.  Got tot the top at 3,936 feet around 2:00 pm.  Took in the view from the old fire tower.  Quite something!  Ridges and valleys as far as the eye could see.  And in the far distance to the east:  the White Mountains of New Hampshire.  The trail is often lined these days with blankets of clover which seems to grow on just about any surface:  on moss,on stumps, on clefts in rocks .  The clover is a delight to my eye in much the same way as were the spring wildflowers early in this hike.
Posted by Mark Fleming at 1:03 AM No comments:

Made it over Mount Greylock (highest elevation in Massachusetts), through North Adams and into Sherman Brook Campsite.  11.4 miles on the day.  Hoped to make it into Vermont tonight but breakfast at Bascom Lodge and resupply in North Adams did not leave us in the mood to walk uphill with four day's food until 8:00 pm.  So we are in here.  Morning was cool but not as cold as last night.  I managed to stay warm in my light bag but I had to layer up.  The climb to Greylock summit was never ending --or so it seemed.  The summit was fogged in when I reached it.  The lodge there is very nice, very rustic.  I sat in the lobby waiting for Red and Gary, drinking a cup of coffee.  Felt so good I could have sat there forever.  Breakfast was excellent:  four pieces of French toast, three sausages, homefries, fruit and coffee.  That plus the cool weather was a real pick-me-up,  Also talked to Maggie on the phone from the lodge which was good.  Hike down from Greylock was long--2800 feet down over six miles.  Did it slowly and deliberately.  North Adams is tucked between two ridges in the Hoosic River valley.  Very pretty.  Tomorrow we climb to the top of the north ridge and into Vermont.
Posted by Mark Fleming at 1:26 AM No comments:

Made it to Upper Goose Pond Cabin and am tenting behind it.  Cabin is pretty nice but I much prefer the privacy and snugness of my tent.  Besides, we're doing an o-dark-thirty roll-out tomorrow--I won't disturb anyone packing up early.  Felt much better today--was a bit sluggish getting started but the walking was good so I soon got into stride.  At least until I tripped over a branch and crack my knee.  After that, walking was a bi painful--not impossible but I definitely noticed each step.  Had incredibly beautiful light this morning:  shafts of light steaming down through the forest canopy.  The forest was wonderfully cool early on.  Feeling better certainly put the hike back into a positive light.  The past few weeks have been so hot and so buggy that I have difficulty seeing the joy and fun in the hike.  At times I've felt like quitting.  Fortunately, I no longer have a home to return to so quitting doesn't offer much relief.  Besides, I am so close now--only 639 miles to go.  I will finish.  Slow and steady.
Posted by Mark Fleming at 12:37 AM No comments: 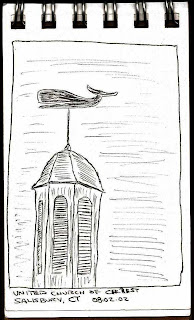 Posted by Mark Fleming at 1:31 AM No comments: