A Book About a Place I Once Hiked

The Wrath of Cochise:  the Bascom Affair and the Origins of the Apache Wars

In what is now southeastern Arizona but in 1861 was the heart of the Chiricahua Apache territory, Army Second Lieutenant George Bascom led an infantry company (on mules!) in pursuit of Apaches who had kidnapped a rancher’s child.  Bascom met with Apache leader Cochise and accused him of taking the child.  Cochise denied this, claiming that another Apache band kidnapped the boy.  Bascom called him a liar and took Cochise’s family members hostage until Cochise agreed to return the boy.  Cochise escaped under fire and plotted his next moves.

If you want to know the detail, read the book.  For present purposoes, I'll just say that the affair ended badly with the rancher and other white hostages tortured, mutilated, their bodies left prominently where Bascom’s troops would find them.  Upon discovering the corpses, the Americans hanged six Apache braves.  The next decade saw widespread attacks and raids on American settlers until, as author Mort surmises, Cochise grew weary of the constant tension of war.  Bascom himself was an early casualty in the Civil War, killed at the Battle of Valverde, New Mexico in February 1862.

That’s the book in a nutshell but author Terry Mort provides much detail of what became known as the Bascom Affair as well as the backstory for each protagonist.  Mort shows how culture and training brought Bascom and Cochise to their confrontation and presents plausible explanations about why they decided as they did.  In the process, the reader learns about American military education and practice in the mid-19th century, the details of the Mormon War in Utah during the late 1850’s, and how Chiricahua Apaches lived and fought in their rugged homeland.  Mort places his account of the Bascom Affair in the context of American sectional politics that drove the nation’s expansion into New Mexico and California.  In all, The Wrath of Cochise is a lively, interesting read.

The Wrath of Cochise was especially interesting for me because I know the places where much of the story occurred.  I backpacked through Chiricahua Mountains and southeast Arizona on multiple occasions in the 80’s and 90’s  My first ever backpack trip in Arizona was in the Chiricahua Mountains and I returned to the area often.  I walked the Crest Trail, saw the wild game and found the water that sustained Apaches in those mountains.  Another trip took me to Cochise Stronghold in the Dragoon Mountains where we the narrow pass created the perfect site to ambush their foes.  A side trip on a Chiricahua hike took me to Fort Bowie National Historic Site where I followed mile and a half trail to the ruins of what served as Army headquarters throughout the Apache Wars.  In its day, Fort Bowie was a major post.  Now it is mostly crumbling adobe walls.

Reading Mort’s account of the events early 1861, it was easy to conjure up the images to go with his descriptions.

Posted by Mark Fleming at 5:11 PM No comments:

A friend and I hiked the Petes Creek-Colonel Bob trail yesterday.  With some snow still on the higher reaches we weren't sure if the entire route was passable all the way to the peak but we knew we'd get some good walking into a small wilderness area adjacent to Olympic National Park.  We began what was a steady climb, leaving the Petes Creek trail head around 10:30.  The trail was good but overgrown in places.  We had to scramble around and over a few blow downs along the way but nothing I wasn't able to manage even with my arthritic hip.

The trail passes through rainforest as it climbs.  We see lots of green, brown, rust and all the colors of life and decay that make up a living forest.  Looking up, massive trees seem to holding up the sky.  Ground level is a jumble of vertical and horizontal surfaces mixed with endless odd shapes--roots, rock and earth--covered in moss, fungi and detrius, all bound together in an organic whole.

Early on the trail has an easy ambiance as our legs acclimated to walking.  The ambiance remains but the steepening climb requires ever more work and effort as we ascend.  A long climb up the Petes Creek drainage ends at a set of even steeper switchbacks reminiscent of marginal Grand Canyon trails.  The switchbacks cross a rock slide area and three ice fields above tree line.  We reach the saddle at 3600 feet where the trail descends toward Moonshine Flats before continuing up to the Colonel Bob Peak.  We know that we will not make the peak and see no sense in dropping 200 feet so that we can turn around and climb back up.  If we are going to descend, we will descend toward home.

The hike down goes a bit faster.  Now I'm tired and the relentless downhill makes for slow and very deliberate walking.  I land on my ass a few times after slipping on loose scrabble.  Nothing serious but for the first time I am thinking that trekking poles might me a good idea for me from now on.  My single walking stick seems inadequate given my increasing instability.  My hip has done well on this trip but I can feel the impact of the day's effort in my legs and my feet.

We make it back to the trail head around 4:45, both of us very tired.  Within the hour we are in Aberdeen polishing off plates of huevos rancheros which give us enough energy for the drive back to Olympia. 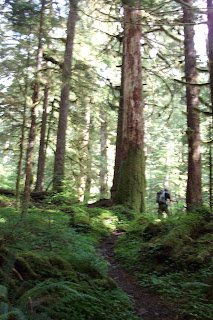 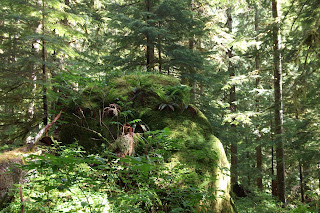 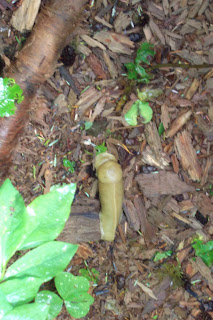 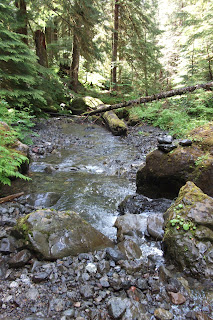 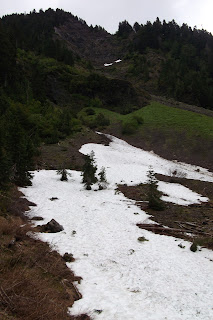 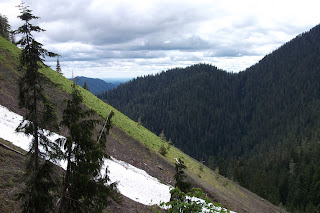 Posted by Mark Fleming at 12:04 PM No comments:

Email ThisBlogThis!Share to TwitterShare to FacebookShare to Pinterest
Labels: not the Appalachian Trail, Olympic Mts

June 17-18, 1978. Elliott Knob, Virginia.  Sunset and sunrise from a high peak on the divide separating two great eastern rivers. I watch dawn break from the mountain's east side. The horizon is covered with clouds which break up a bit further into the sky. I can see blue sky behind the clouds, many of which are brightly lit by the sun. This soft morning light contrasts with the drama of yesterday's sunset. Clouds were dispersed across the entire sky, thicker at the horizon but still open enough to see the sun's fiery red disc, glowing intensely red-orange as it majestically settled to the horizon. Sunlight streamed across the evening sky, lighting up the clouds sweeping toward me like a formation of starships. As these cloud starships pass over my ridge, they enter the realm of night. Their golden orange undersides quickly fade to gray as they cross the day's end. Last night was a star filled night. The moon was up early on, surrounded by a complete halo. After moon set the sky filled with an immense display of stars.
Posted by Mark Fleming at 7:57 PM No comments: