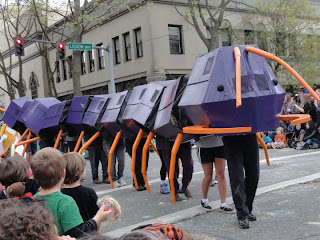 Saturday was the 18th Procession of the Species here in Olympia.  A friend has a fine album of photos, of which the above is one, on Facebook.  My memory card only had about 10 shots left so my own photos capture only the first few minutes.  On the other hand, I got to watch the event without looking for photographs.

The local paper has a good album Procession images, too.
Posted by Mark Fleming at 9:13 AM No comments:

Email ThisBlogThis!Share to TwitterShare to FacebookShare to Pinterest
Labels: not the Appalachian Trail 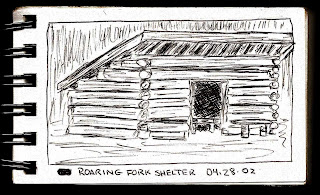 Posted by Mark Fleming at 12:00 AM No comments:

Saturday night at Painter Branch.  Probably the most beautiful spot we've camped.  We're in little side cove of the branch, surrounded by tall, straight tulip trees that are leafing out.  Spring is everywhere here --green, green, green.  Had a cheeseburger and resupply at Mountain Mama's.  We beat the crowd in so we got quick service but many hikers showed up before we left.  Hiked 13 trail miles today plus at least two of road walking.

The PM hike out of Mountain Mama's was a steep climb.  Didn't want to do it but did anyway.  Glad I did.  Less crowded here than a shelters.  Maverick (from Texas) is tenting with us and some people are nearby but after the crowds in the Smokies, this site is very quiet and private.

Random thoughts from the past day's hike:
No drawing tonight.  Late camp.  Too dark.
Posted by Mark Fleming at 12:00 AM No comments:

A ferocious thunderstorm struck the [Mt Collins] shelter area last night.  Rain poured down heavy for over two hours beginning about 1:00 am.  I could almost see a wall of water outside the shelter in the dark.  Maybe I did.  Lightning was striking within a mile of the shelter.  Morning dawned foggy and wet.  Maybe still raining but enough was blowing off the trees (and still on everything) to get us quite wet.  Went out at 8:42 in full rain gear.  Trail was sloppy and wet.  It was hard going--no morning pick-me-up.  Got to Newfound Gap around 11:00.  Whisper and Lightfoot were trying to figure out which direction to Gatlinburg.  Caught up with Red and Gary at Icewater Spring Shelter but they left soon after.  Lunch break with Radar and Pushing Up Daisies.  PM hike went along an exposed outcrop with tremendous view west (but for the fog).  Much of the PM was spent walking along a razor's edge of a ridge.  Sun came out in mid PM offering some fine views in either direction.  Walked strong.  Covered 16 miles in seven hours.  Got in to Pecks Corner Shelter at 1545.
Posted by Mark Fleming at 12:00 AM No comments: 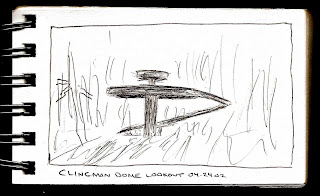 Posted by Mark Fleming at 7:26 PM No comments: 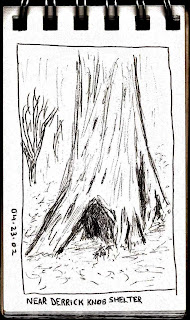 Posted by Mark Fleming at 7:44 PM No comments: 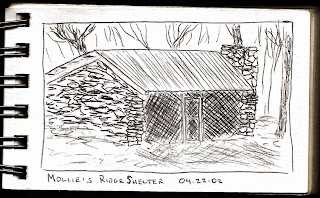 Posted by Mark Fleming at 6:35 AM No comments:

Zero day in Fontana Village. A day to do little but organize, eat, clean up and reflect. It feels lazy but oh so wonderful to rest before heading into the Smokies.

6:00 pm. Pack is ready. I've had a second shower. All that's remaining is a last dinner buffet, one more night in a bed and out of here tomorrow at 6:00 am. My pack is much heavier now but I know that I can carry it well. I now have my small tent and hope it will be adequate for me. The last 19 days have been truly fun. I see no reason why it should not continue to be so. Hiking is a lot of work but the reward is being outside in nature at a level I've never experienced. On to the Smokies!
Posted by Mark Fleming at 6:13 AM No comments: 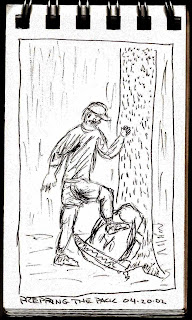 Gary had a unique way of adjusting his pack.
Posted by Mark Fleming at 5:07 PM No comments: 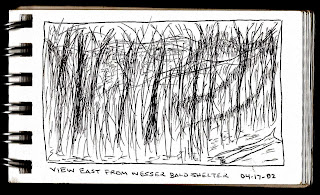 Posted by Mark Fleming at 12:01 AM No comments:

About the Sketches Backstory

The story of my trail sketches would not be complete without including Mary Boyd Ellis, my art teacher in Gallup, New Mexico. In the two years immediately before my thru-hike I took weekly lessons each Saturday afternoon with her and three or four other students in her wood heated studio on a ridge west of town. Part of the instruction included sketching, a "skill" that I took with me on the trail. It was lightweight and uncomplicated.

Even more than the technical skill, Mary taught me a new way to see. As a black and white photographer, I had an eye for the world as I could see it in a finished photograph. Mary taught me how to see the elements of the light and dark, shape, form and texture I found in a photograph. She showed me how to make all that appear on paper and canvas by hand, without the machinery of camera and darkroom. My two years painting with Mary and the Saturday afternoon students are among my fondest memories. Her spirit is in every sketch I made.
Posted by Mark Fleming at 10:05 AM No comments:

About the Trail Sketches

My one reviewer speaks a truth about my sketches. They are not that good. He also notes that they fit just fine. That is why I included them, amateurish as they are. My sketches are what I was able to accomplish while walking along the trail, my visual record. I knew that the sketches would be included in any account of my thru-hike but I also knew that they weren't going to be polished works.

I learned early on that a competent, representative sketches takes much time and talent, neither of which I had much extra on the AT. I always hoped I would somehow find some Zen-like simplicity wherein I could create the feel of a scene with only a few lines. That never happened. So I used lots of lines, light and shadow to sketch something that looked like what I was seeing.

Many sketches were drawn from memory. Often in camp,remembering what I'd seen that day. That's how I came up with my reduced image of the War Correspondent's Memorial on page 83. The sketches I've posted on this site so far at ones not included in the book. I plan to keep it that way, unless I decide not to. Expect to see more.

The truth of my sketches is also the truth of the book. At the Speed of Foot is not perfect. But it tells the story. My reviewer recognized that. He credits me for a story whose worth outweighs the shortcomings in its telling.
Posted by Mark Fleming at 9:52 AM No comments:

Tarping tonight just north of Standing Indian Shelter after a 12 mile day. Shelter had plenty of space but Red and Gary did not want to spend the night with a troop of Boy Scouts camped nearby. Good walking today under overcast skies but no rain. We're having a shower now but not very hard--well, now it seems to be. I set my tarp up low at the foot end to keep out moisture but the air itself is moist so I expect some dampness. We crossed into NC today and almost immediately the trail became more challenging--a couple of long, steep climbs and much rockier. Lunch at Muskrat Shelter around noon and into Standing Indian about 3:00. In all, a pleasant day, especially after such a lazy day yesterday.

Yesterday at Plumorchard Gap Shelter was a festival of slackness. We had 12 people in the shelter plus five more in tents nearby. Most everyone had come in from a town day in Hiawasse and arrived in the early afternoon We compared notes on our stay. From the sound of it, Blueberry Patch was the best place to stay and the Chinese restaurant was the best food.
Posted by Mark Fleming at 1:00 AM No comments:

Rain came last night; sporadic, heavy showers beginning around 1:00 am. Took some moisture but stayed dry. Was able to pack up in the tarp. Showers continued into AM. Bared my butt on GA 75 at Unicoi Gap putting on long johns. Showers eased up enough to allow me to think that I might make it in somewhat dry. Till we crossed Tray Mountain in a hard shower. Soaked me pretty well. Got in to Tray Mt Shelter around 2:00 pm. Lots of people around, floor wet and muddy. In the end we got three spaces and put our tarps over the [open shelter] front. Changed into some dry items. Made a decent enough site.
Posted by Mark Fleming at 1:14 AM No comments: 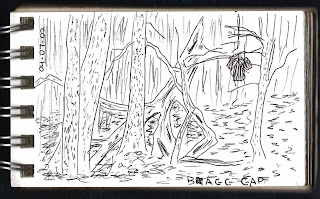 Posted by Mark Fleming at 8:04 AM No comments:

Morning at Amicola [sic] Falls State Park where the approach trail to the AT begins. It's quiet in the campground but people are beginning to stir. We finally made it her and will start the AT hike in an hour or so. At Last!

Evening: Made it to Springer Mountain shelter in about 5 hours. Good walking on good trai--about 7.5 miles. The sign said the hike was strenuous but I thought it wasn't too bad. Woods are still in winter mode but flowers are pushing up in many places and we can see lots of buds on the trees. Also saw lots of people--put' near ever'body and their dog. Surprisingly, we were the first to the shelter so we claimed it for ourselves. So far we are the only ones in the shelter, although about 6 to 8 people in tents nearby.
Posted by Mark Fleming at 12:02 AM No comments: 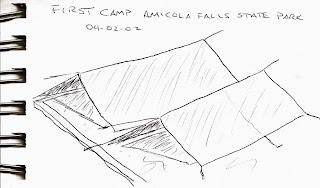 [editor's note: The camp is Amicalola State Park. I apparently did not know where I was at the start.]
Posted by Mark Fleming at 12:16 AM No comments: